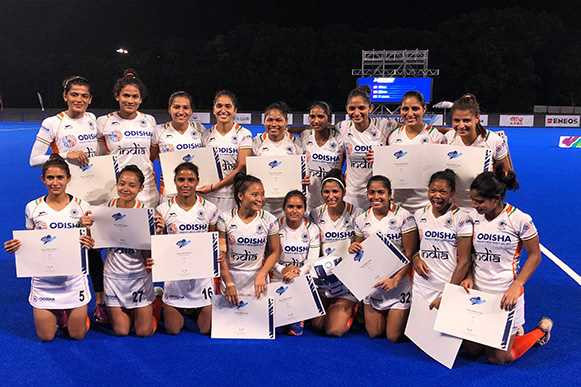 India won both the men’s and women’s finals at the Tokyo 2020 Olympic hockey test event, but it is the International Hockey Federation's (FIH) verdict on the venue that will please the organisers most.

The main purpose of the event was to test the operations being put in place for next year, as well as the facilities.

The FIH claims one of the greatest learnings is that the newly-built Oi Hockey Stadium "brilliantly passed the test" and earned unanimous praise from teams and officials.

"The Oi Hockey Stadium is a remarkable facility to boost the development of hockey in Japan," FIH chief executive Thierry Weil said.

"I invite all hockey fans to come and see matches in this venue and urge them to invite families and friends to come and share their passion."

Due to the nature of the test event, there were no ranking points at stake.

"It has not only been a great tournament with eight fantastic teams but also a perfect opportunity to test pre-tournament and match protocols, and to see what set-up will be in place for the technical team at Tokyo 2020," Tammy Standley and Christian Deckenbrock, both FIH technical delegates for the event, said.

The FIH also launched its official "Gift of Hockey" campaign, inspired by the concept of omotenashi (Japanese hospitality), a cornerstone of Japan’s culture.

"We are very satisfied with the operations put in place by TOCOG (Tokyo Organising Committee of the Olympic and Paralympic Games) for this event," said Tayyab Ikram, a FIH Executive Board member, an International Olympic Committee Commission member and chief executive of the Asian Hockey Federation.

"Of course, some areas require some improvement – which is very normal at this stage of the process – but nothing which is causing us any major concern.

"This is very encouraging for next year's Olympic tournaments.

"Now, it is of paramount importance that the Japanese community takes the opportunity of the Olympic Games to bring hockey in Japan into a new dimension."

On the pitch, the men’s final saw India avenge their pool-stage loss against New Zealand by beating the Kiwis 5-0.

"It was a good opportunity for us to play in a semi-final and a final," India’s coach Graham Reid said.

"Indeed, we called yesterday’s match (a 6-3 win over Japan in the pool stage) a semi-final because that’s what it was.

"So it’s a good practice for those sort of games."

India’s happiness doubled a few hours later when their women’s team overcame Japan 2-1, thanks to goals from Navjot Kaur and Lalremsiami.

Minami Shimizu scored for Japan to cancel out Kaur’s opener but it was not to be for the home nation, who lost to India by the same scoreline as they did in the pool stage.

"For us, this event was very important to prepare for the FIH Hockey Olympic qualifiers and getting every match better," India’s coach Sjoerd Marijne said.

"I think we did that.

"We reached a very good level in the last two matches."

Australia’s first and only win of the competition was enough to secure the bronze medal, beating China 3-1 in the third-place playoff.