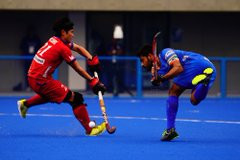 India secured their place in the men's and women's finals as action resumed today at the Tokyo 2020 Olympic hockey test event.

In the men's event, Mandeep Singh bagged a hat-trick to help India to a 6-3 win over hosts Japan at the Oi Hockey Stadium, newly-built for next year's Games.

Singh found the target in the ninth, 29th and 30th minutes, while team mates Nilakanta Sharma, Nilam Xess and Gurjant Singh also got their names on the scoresheet.

Tomorrow will see India battle it out for glory with table toppers New Zealand, who made it three wins out of three in the round robin by beating Malaysia 3-1.

Japan will go up against Malaysia in the third-place play-off.

🔝 of the points table, through and through!

A 0-0 draw with China was enough for India's women to finish at the summit of their four-team round-robin table.

The runners-up spot and the second place in the final went to Japan, who drew 2-2 with Australia.

India finished on five points, while Japan and China both ended on four with the two teams split by virtue of goals scored.

China and Australia will contest the third-place play-off.

The tournament is part of the "Ready Steady Tokyo" test event series for next year's Olympic and Paralympic Games.