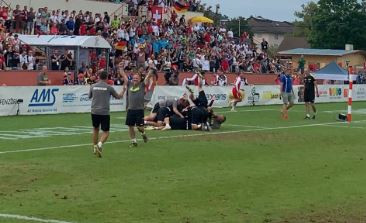 It was the second meeting of the competition for the two finalists, with Germany also emerging victorious in the first match.

Italy secured fifth place with a 3-1 victory against Chile, which fell in line with their pre-tournament ambitions, according to captain Simon Prudenziati.

He said: "Our goal, which we set ourselves in advance, was fifth place.

"We are overjoyed that we have achieved that now.

"The game was tough, but we were hungrier for the win."

Argentina claimed seventh place with a 3-0 win against Namibia and Czech Republic won 3-2 against the United States to seal ninth place.