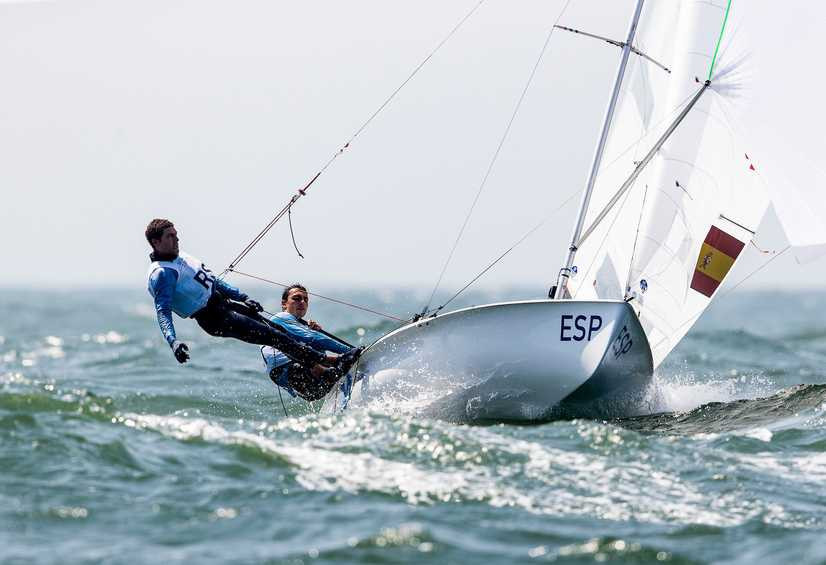 Spain’s Jordi Xammar and Nicolas Rodriguez won both their races in the 470 men's fleet on the opening day of the Tokyo 2020 sailing test event at Enoshima Yacht Harbour.

After finishing runners-up on the same stretch of water when the 470 World Championships were held last week, the Spaniards maintained their level in a competition that forms part of the Ready Steady Tokyo series.

The 363 competing sailors from 47 nations were met with strong winds and big waves on the first of six days of competition.

World champions Mat Belcher and Will Ryan stand in second place, with Anton Dahlberg and Fredrik Bergström of Sweden, third at the World Championships, in third position.

A similar scenario is unfolding in the 20-boat women's fleet, where world silver medallists Ai Kondo Yoshida and Miho Yoshioka of Japan lead after two races with a second and a first.

A race win for Agnieszka Skrzypulec and Jolanta Ogar of Poland means they are second, ahead of Britain’s newly-crowned world champions Hannah Mills and Eilidh McIntyre.

Yunxiu Lu of China leads the 20-board RS:X Women's fleet with two wins and a second place.

"When I arrived, for around 15 days there was no wind, then we had another 15 days of strong wind."

Peina Chen, her team mate and last year's World Cup Series Enoshima winner, is challenging her for the Tokyo 2020 spot.

Tied on points in second and third respectively are Maja Dziarnowska of Poland, who picked up the day's third race win, and Emma Wilson of Britain.

In the 24-man RS:X men's fleet, wins went to Kiran Badloe of the Netherlands, Britain’s Tom Squires and Thomas Goyard of France.

In the 49er fleet, where 21 teams are competing, reigning Olympic champions Peter Burling and Blair Tuke of New Zealand won two out of their three races.

Britain’s Dylan Fletcher-Scott and Stuart Bithell are second after one race win, ahead of Australian brothers Will and Sam Phillips.

British sailors are also going well in the 49erFX, with Charlotte Dobson and Saskia Tidey topping the 23-strong fleet.

Two wins out of three races puts them ahead of 2019 Pan American Games champions Martine Grael and Kahena Kunze of Brazil, with Victoria Jurczok and Anika Lorenz of Germany third.

In the Finn fleet, where 22 sailors are competing, 2018 world champion and 2019 European runner-up Zsombor Berecz of Hungary impressed with a third and a race win.

He leads 2018 World Cup Series Enoshima winner Nicholas Heiner of the Netherlands, who earned two seconds, and Britain’s European champion Giles Scott, who won the first race but finished sixth in the next.

A first and a second for Sam Meech of New Zealand established him as early leader in the 35-strong laser fleet.

Meech is two points ahead of Matt Wearn of Australia and Jean Baptiste Bernaz of France, second and third respectively.

Hermann Tomasgaard of Norway earned the other race win of the day.

Maria Erdi of Hungary leads the way in the 40-boat laser radial fleet with a first and a second.

Last year's World Cup winner in Enoshima, Marit Bouwmeester of the Netherlands is second, with 2019 world champion Anne-Marie Rindom of Denmark third having won the second race of the day.

The Nacra 17 fleet is topped by Italian duo Ruggero Tita and Caterina Banti, who claimed two wins and a third place.

Paul Kohlhoff and Alica Stuhlemmer of Germany took the other race win to put them second overall, ahead of Ben Saxton and Nikki Boniface of Britain.