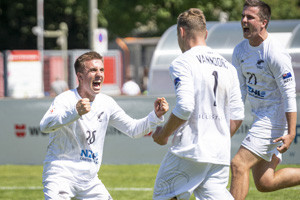 New Zealand caused an upset against Serbia as they made their debut at the International Fistball Association World Fistball Championship in Winterthur.

In their first World Championship, New Zealand needed five sets to claim an opening day Group C victory as they edged out their European rivals 3-2 at the Schützenwiese Stadium.

Fellow debutants Belgium were unable to find a winning formula in Switzerland as they lost 3-1 to Serbia this morning, before succumbing to Czech Republic on the same scoreline in their second game of the day.

They won 3-0 against The Netherlands and Japan as they moved top of the group, while Denmark overcame Australia 3-2 in the group's other opening day fixture.

Germany are the defending champions at the Winterthur event, a qualifier for the 2021 World Games in Birmingham in America.

They had the perfect start in Group A as they eased past Argentina 3-0 as group rivals Brazil recorded a 3-0 win against the United States.

The group stage is due to continue tomorrow.