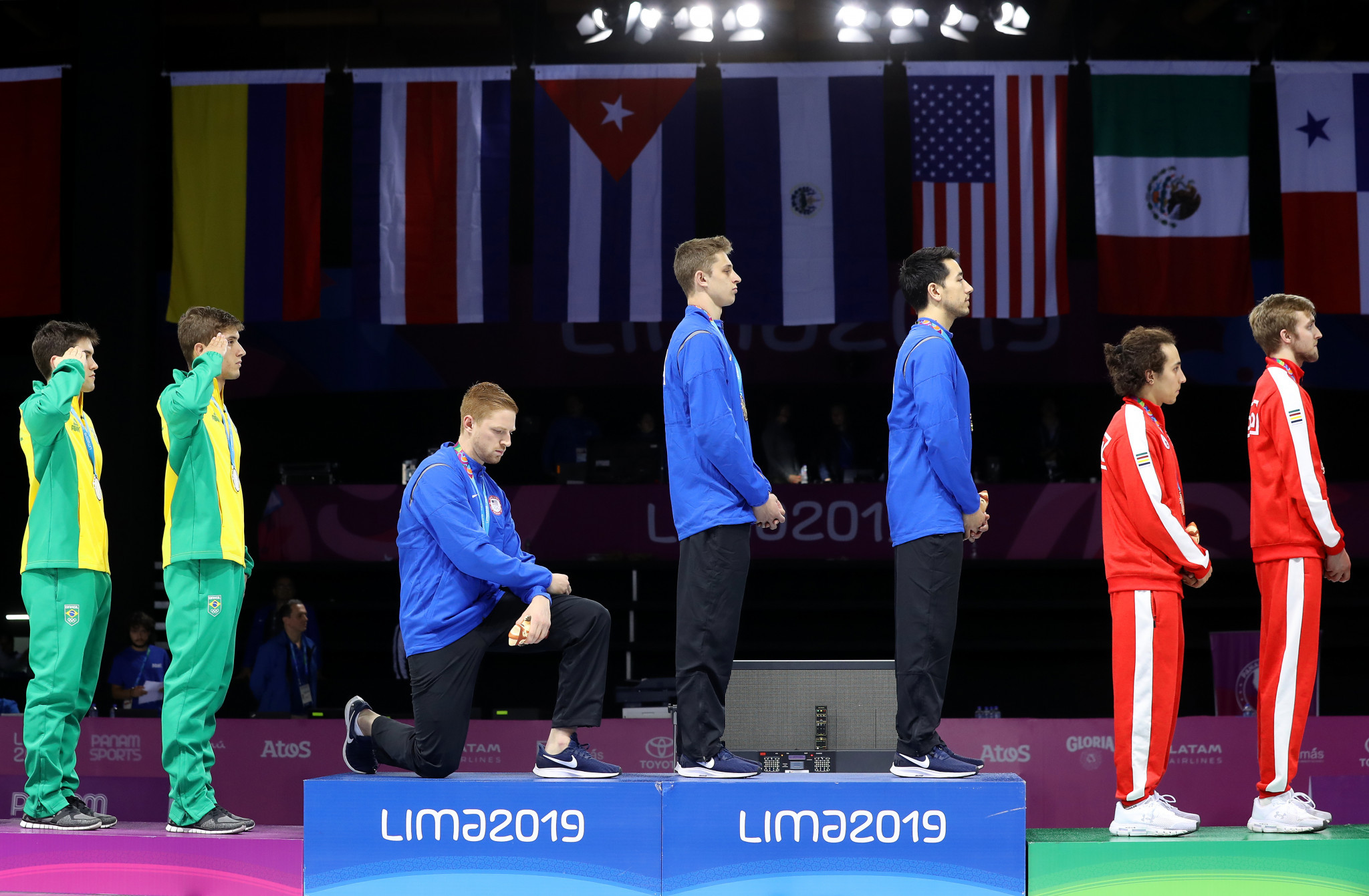 Imboden had already claimed a bronze medal in the individual men’s foil event, before topping the podium in the team competition alongside Gerek Meinhardt and Nick Itkin.

The 26-year-old, the world number two, then knelt as the American national anthem was played during the medal ceremony.

The act is seen as a civil rights protest, started by American football player Colin Kaepernick in 2016.

Kaepernick had knelt to highlight police brutality and racism.

The stance has become more commonly referred to as "taking a knee".

Imboden, a men’s foil team bronze medal from the Rio 2016 Olympic Games and world champion, posted on Twitter to explain his decision to take the knee after the event.

"We must call for change," he said.

"This week I am honored to represent Team USA at the Pan Am Games, taking home gold and bronze.

"My pride however has been cut short by the multiple shortcomings of the country I hold so dear to my heart.

"Racism, gun control, mistreatment of immigrants, and a president who spreads hate are at the top of a long list.

"I chose to sacrifice my moment today at the top of the podium to call attention to issues that I believe need to be addressed.

"I encourage others to please use your platforms for empowerment and change."

We must call for change.
This week I am honored to represent Team USA at the Pan Am Games, taking home Gold and Bronze. My pride however has been cut short by the multiple shortcomings of the country I hold so dear to my heart. Racism, Gun Control, mistreatment of immigrants, pic.twitter.com/deCOKaHQI9

The US has suffered from three mass shootings in the past two weeks, with American President Donald Trump receiving criticism for his response to the tragedies.

Less than 24 hours after Imoden's protest, a second was then staged by Berry, following her victory in the women's hammer throw competition.

Berry was seen raising her right fist at the conclusion of her medal ceremony.

It mirrored the act of Olympic sprinters Tommie Smith and John Carlos at the Mexico 1968 Olympic Games, where the duo won gold and bronze medals in the 200 metre race.

The act was a civil rights protest against racial discrimination.

The Australian Olympic Committee last year awarded a posthumous Order of Merit to Peter Norman, who stood in solidarity with the black American athletes on the podium.

After Carlos had left his gloves at the Olympic Village, it was Norman, who came from a Salvation Army background, who suggested that the pair share Smith's to carry out a salute that Smith later clarified had been for human rights and not black power.

Both Imdoen and Berry are in breach of Panam Sports rules under a section on "advertisements and publicity during the development of the Pan American Games.

The rules state "No kind of demonstration or propaganda of any kind is allowed at the venues of the Games or at other sites or areas considered part of the Games."

The consequences of breaches in the relevant section state: "Any violation of the provisions of the present Section shall result in disqualification or withdrawal of the accreditation of the person or delegation concerned.

"The Panam Sports Executive Board may take further measures and/or impose further sanctions against the NOC or Pan American Sport Confederation and/or International Federation that are responsible of such 29 violation.

"The decisions taken by the Panam Sports Executive Board regarding this matter shall be final."

Panam Sports declined to comment when contacted by insidethegames.

United States Olympic and Paralympic Committee (USOPC) have said their leadership are reviewing the consequences that may result from the political protests.

“Every athlete competing at the 2019 Pan American Games commits to terms of eligibility, including to refrain from demonstrations that are political in nature," USOPC spokesman Mark Jones told insidethegames in a statement.

“In this case, Race didn’t adhere to the commitment he made to the organising committee and the USOPC.

“We respect his rights to express his viewpoints, but we are disappointed that he chose not to honour his commitment.

“Our leadership are reviewing what consequences may result.”

Imboden and Berry are not the first to express anti-Trump sentiment during the Games here.

"We have a president who is racist and a misogynist, who doesn’t value anybody but himself," he said.

The issue has not been exclusive to Lima 2019, however, with women's football player Megan Rapinoe confirming that she would not visit the White House if the US were triumphant at the FIFA Women's World Cup, which they went on to win last month.

During the tournament, she refused to sing the national anthem in protest at a decision by US Soccer to ban players from kneeling during the anthem.

Her actions drew a response from Trump, who accused Rapinoe of "disrespect" in a series of tweets.