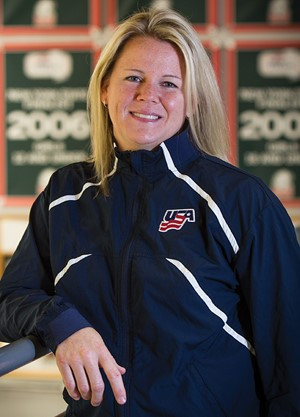 Olympic gold medallist Shelley Looney has been named as head coach of the women’s ice hockey programme at Lindenwood University in Saint Charles in Missouri.

Looney spent 13 years as a player on the United States' national team and famously scored the game-winning goal against Canada in the final of the first women’s Olympic tournament at the Nagano 1998 Winter Games.

She also claimed gold at the 2005 International Ice Hockey Federation Women’s World Championship and a silver at the 2002 Winter Olympics in Salt Lake City, among other honours.

After her playing career, Looney twice served as the head coach for the US women’s national university team, and once as an assistant.

She was also an assistant on the under-18 and under-22 women’s select teams, and a co-head coach with the Buffalo Beauts of the National Women’s Hockey League.

"I’ve coached many different teams in the past at all levels," Looney said.

"Many people asked when I was getting into the college world on a regular basis, and when this came up, I felt it was a great opportunity to grow Lindenwood’s hockey programme and make an impact."

She added: "I spend a lot of my daily time with youth.

"Somehow, I connect really well with them and I understand how to get the most out of them.

"I think it comes from giving them encouragement and self-confidence, and that goes across the board at any level."

Looney has also worked as a chief evaluator at USA Hockey district development camps, while serving as a head coach and coaching director of several development festivals.

During the last five years, she served as the director of hockey for the Buffalo Bison Youth Hockey Organization.

Additionally, she was a girls' coaching director with the New Jersey Colonials.

"The athletic director has been wonderful to work with and the support I’ve received is great.