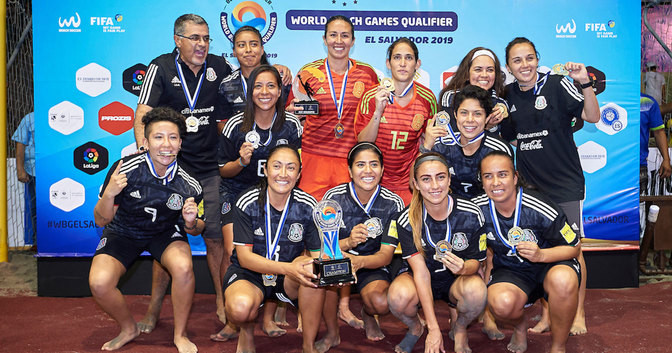 Mexico booked their place in the women's beach soccer tournament at the Association of National Olympic Committees (ANOC) World Beach Games in Doha.

The Mexican side claimed the only available World Beach Games place as they made it three wins from three to top the Confederation of North, Central American and Caribbean Association Football (CONCACAF) qualifier group in El Salvador.

Daniella Paulin scored a brace as Mexico secured a first international tournament triumph by defeating the hosts 6-2 in in San Salvador.

The United States finished behind Mexico following a 7-1 win over The Bahamas.

Hosts El Salvador and Mexico, who had already secured their tickets to the men's tournament at the World Beach Games, met in the final of the qualifier.

A David Vizcarra hat-trick was the difference between the sides as CONCACAF beach soccer champions Mexico claimed a 5-4 victory.

The United States prevailed 8-6 against Panama to seal third place in the tournament.

Alfonso Maquensi's hat-trick for Panama was enough to make him the competition's top scorer.

The Bahamas won 8-7 against Trinidad and Tobago to finish fifth.

Guatemala needed extra-time to see off the Virgin Islands as they claimed seventh place with a 6-3 victory.

The World Beach Games were due to be held in San Diego from October 10 to 15 but ANOC relocated the event from the American city after Californian organisers proved unable to raise the necessary money to fund it.