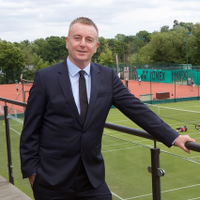 International Tennis Federation (ITF) Presidential candidate Dave Miley has targeted a more sustainable model for the sport and boosting the prestige of the organisation as he continues his campaign.

The Irish official has been in Lima during the Pan American Games to speak to ITF members prior to the vote at the Annual General Meeting in Lisbon on September 27.

Miley is one of four candidates vying for the ITF Presidency, along with incumbent David Haggerty, India's Anil Khanna, an ITF vice-president who lost to the American by eight votes in the 2015 election, and Czech Republic's Ivo Kaderka.

The former executive director of tennis development at the ITF has been the most vocal candidate to date and has visited 32 countries since the campaign began.

Miley told insidethegames he expects to visit a further 35 nations prior to the vote, with the aim of meeting as many presidents face-to-face to discuss his plans for governing body.

When launching his manifesto at Wimbledon last month, Miley said he was setting out a vision to ensure a healthier game.

While claiming he would continue 50 to 60 per cent of work currently underway at the ITF, Miley has promised an overhaul of the ITF World Tennis Tour, the umbrella name for all former pro and junior circuit tournaments.

The tour is claimed to serve as the player pathway between the junior game and the elite levels of professional tennis.

Reforms to the tour introduced by the ITF had prompted criticism from players, with Miley insisting the current format is unsustainable.

“We need to look at the structure and create less costs for players,” Miley told insidethegames.

“We need to have more players breaking even.

“The model is unsustainable.

“Not everyone will be able to break even, but we have to admit that the current system is broken.

“I think we can develop a model where maybe the top 700 players could break even.

“We need to have a better entry level and junior circuit.

“We also need better representation from all over the world in the game.

“If you have players coming from a wide range of countries, it certainly helps the marketability of tennis in those regions.”

Among Miley’s campaign pledges are the creation of a joint men's and women's World Championships to be held every two years, the establishment of an ITF chairman role and doubling the value of what he calls the "global tennis market".

He has aimed at working towards devising a Davis Cup format which "better respects the tradition of the competition".

Miley has vowed to hold a World Tennis Summit in the first half of next year, which he aims would involve key stakeholders in the sport including players and organisations, such as the Association of Tennis Professionals (ATP).

The Irishman has claimed he has heard concerns from ITF member federations over the standard of top officials at the governing body.

He pledged to raise standards and ensure the ITF is treated with more respect by the ATP, while working in collaboration with the organisation.

"I want the quality at the top level of the ITF to be at the same level as organisations like the ATP and from what I am hearing, people do not currently believe that to be the case,” he said.

“We pay for everything that loses money, such as development and coaches.

“I want us to articulate why we should be respected.

“I want to work with the likes of the ATP on a mutual basis, but we also need to be respected.”

Miley said he would conduct a “complete review” of election rules should he be elected ITF President next month.

Miley and Kaderka have both criticised the current rules installed by the ITF Ethics Commission, which they have claimed give incumbent Haggerty an advantage.

Haggerty was the only candidate permitted to attend the Confederation of African Tennis (CAT) General Assembly in Madagascar in June.

The American was at the meeting in his capacity as ITF President.

The ITF Ethics Commission ruled last month there was no evidence to support a complaint made regarding Miley's attempt to hold a reception to speak to members at the Assembly as the event – which ultimately did not take place.

It was not officially part of the AGM and organised away from the venue.

Haggerty was also cleared by the Ethics Commission over his use of consultancy firm Jon Tibbs Associates (JTA).

Ethics Commission chairperson Sandra Osborne claimed she was satisfied the American had not enlisted the services of JTA when the company was still working for the ITF.

JTA's relationship with the worldwide governing body had ended on May 31 after losing what the firm said was a "competitive communications tender issued by the ITF".

Osborne confirmed JTA had started working for Haggerty on June 3.

She found that JTA Design, which is separate to JTA, had worked on Haggerty's manifesto, released on June 10, but that they were "separate corporate entities with separate staff and clients".

Miley has said he would seek to focus on his own performance and not get distracted by his rivals in the election campaign in the build-up to the election.

“I want people to know me and that I want to make a difference,” he said.

“It is not about Dave Miley, I want them to contribute and give feedback on my manifesto.

“I want the ITF to be open to its members.

“We need to understand that every nation is different and has different needs.

“For instance, some will have to travel a long way to compete, particularly those here in South America.

“We need to be an organisation which works for its member nations.”