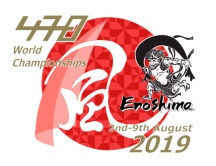 Light winds forced the cancellation of the entire day's racing at the 470 World Championships in Enoshima, the venue for sailing at next year's Olympic Games in Tokyo.

Organisers started the opener in the women's event but the fleet was unable to get to the first mark within the 20-minute time limit, prompting the Race Committee to bring a halt to the race.

The wind never returned and the decision was taken shortly after to call off the first day of racing.

France’s Camille Lecointre, competing at the event alongside team mate Aloise Retornaz, said it was right to abandon the action.

"Today the forecast was for light winds," she said.

"The Race Committee manged to start the race in these light conditions but unfortunately we were over the time limit at the top mark, so we had to abandon.

"Then racing was stopped for the day, it was the right decision."

European champions Lecointre and Retornaz are among the favourites for victory at the World Championships, which conclude on Friday (August 9).

"Our goal here is to win a medal," said Retornaz.

"It is our main objective of the year, so we want to have a proper race all days of the week."

The event is taking place during a similar window to the Olympic sailing competition at Tokyo 2020, due to run from July 26 to August 8.

Three races in the women's and men's fleets are scheduled to be held tomorrow.