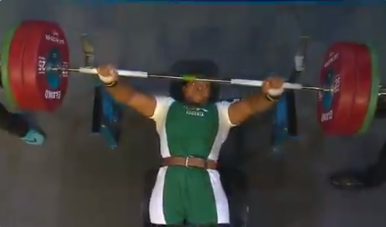 Nigeria’s Folashade Oluwafemiayo held off China’s Zheng Feifei in an epic battle to claim the women’s up to 86 kilograms gold medal at the World Para Powerlifting Championships in Kazakhstan’s capital Nur-Sultan.

Zheng held the lead after breaking Oluwafemiayo’s world record lift of 146kg with a third-attempt success at 147kg, but her African rival responded by managing 150kg to improve the global mark again at Astana Congress Center.

Oluwafemiayo, who won the silver medal in the women's under-75kg event at the London 2012 Paralympic Games, has previously served a two-year doping ban after testing positive for a banned substance at the 2013 Fazaa International Powerlifting Competition in Dubai.

She returned an adverse analytical finding for furosemide, which the World Anti-Doping Agency classifies as a masking agent for performance-enhancing drugs, in a urine sample.

The women's up to 86kg bronze medal went the way of Russia’s Vera Muratova, who registered a European record-breaking lift of 143kg.

There was also a world record-breaking win in the men's up to 107kg category as Mongolia's Sodnompiljee Enkhbayar beat his own global mark of 244kg, set at the 2018 Asian Para Games in Indonesia's capital Jakarta in October, with a lift of 247kg.

Enkhbayar went onto attempt 253kg, but he was unable to manage it.

Iran's Aliakbar Gharibshi finished second with 240kg, having failed at 250kg and 254kg.

Rounding off the podium was Mexico's Jose De Jesus Castillo with 235kg.

More records tumbled in the men's up to 97kg competition as Iran's Seyedhamed Solhipouravanji secured his first world title by bettering his own Asian mark of 234kg with success at 235kg.

China's Yan Panpan was the runner-up with 227kg, while Colombia's Fabio Torres came third with 225kg.

The men's over-107kg and women's over-86kg events are scheduled to take place.