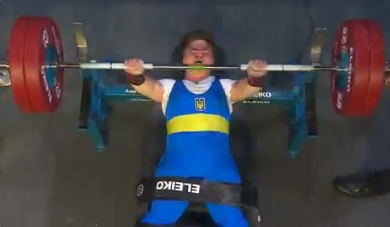 Shevchuk triumphed with a second-attempt lift of 128kg at Astana Congress Center, beating nearest challenger Xiao Cuijuan of China by a margin of 2kg.

The 23-year-old tried to break her world record of 131kg with a third-attempt lift of 131.5kg, but she was unable to manage it.

Rounding off the women’s up to 55kg podium was Russia’s Tamara Podpalnaya with 122kg.

She comfortably defended her world title with a lift of 132kg, despite it being 10kg less than her global mark set at the Rio 2016 Paralympic Games.

The Nigerian with three white lights to win the women's up to 61kg title. 🏆#ParaPowerlifting | #NurSultan2019 | @npplf pic.twitter.com/U5l1QRx66P

The last gold medallist of the day was Malaysia’s Bonnie Bunyau Gustin, who came put on top in the men’s up to 65kg competition with a junior world record-breaking lift of 207kg.

World record holder Paul Kehinde of Nigeria bombed out after one no lift at 194kg and two failures at 195kg.

His world record stands at a much higher weight of 221kg.