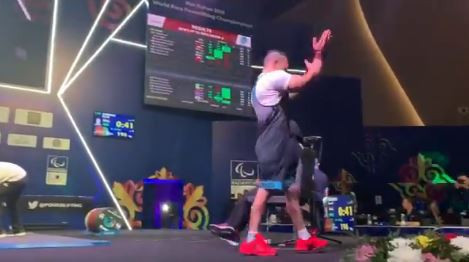 Egypt won two of the seven golds on offer on the second day of the World Para Powerlifting Championships in Kazakhstan’s capital Nur-Sultan – formerly Astana.

Sherif Osman secured the honours in the men’s under-59 kilograms category Group A final at Astana Congress Center, taking gold with a best of 196kg.

Silver went to China’s Qi Yongkai with an Asian record of 195kg, ahead of Chile’s Juan Garrido, who managed 184kg.

The second Egyptian victory went to Rehab Ahmed in the women’s under-50kg class Group A, where gold was claimed with a best of 114kg.

Dandan Hu of China earned silver thanks to an Asian record of 113kg, ahead of bronze medallist Lidiia Soloviova of Ukraine, who managed 111kg.

The day 2 ended with another gold 🥇 for Egypt 🇪🇬 as Rehab Ahmed lifted 114kg to finish ahead of China’s HU Dandan (113kg) and Ukraine's Lidiia Soloviova (111kg). #ParaPowerlifting #NurSultan2019 pic.twitter.com/hgPSBqO1D9

Ukraine’s Kostiantyn Panasiuk won the men’s under-54kg class Group B with a lift of 156kg, ahead of Japan’s Tetsuo Nishizaki, who managed 137kg, and Italy’s Paolo Agosti, whose best was 127kg.

Russian lifter Vladimir Krivulya took gold in the men’s under-54kg class Group A with an effort of 189kg.

Tomohiro Kouse of Japan triumphed in the men’s under-59kg Group C with 132kg ahead of Finland’s Juhani Kokko, who lifted 130kg, and South Korea’s Gwangyeoul Park, who managed 125kg.

Olalekan Rufai of Nigeria won the men’s under-59kg category Group B with 175kg, ahead of compatriot Ibrahim Dauda, who lifted 173kg, and Vietnam’s Van Phuc Nguyen, who managed 155kg.

In the women’s under-50kg class Group B, Spain’s Loida Sabala Ollero won with 95kg, silver going to Morocco’s Halima Lemtakhem with 80kg, and bronze to home lifter Gulbana Abdykhalykova, who also lifted a best of 80kg.