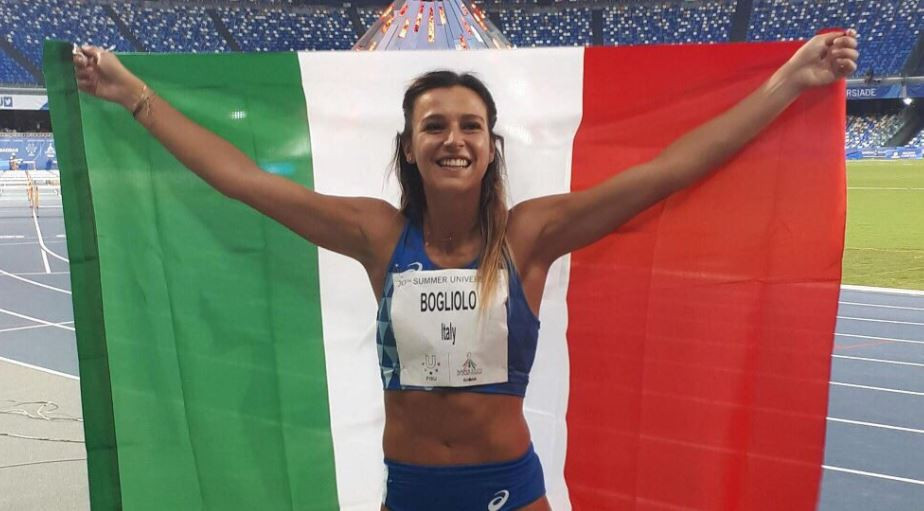 The Italian announced herself on the world stage just 10 minutes after Roberta Bruni secured a thrilling pole vault triumph for the hosts, whose gold medal tally climbed to 13.

In her semi-final, Bogliolo clocked 12.86 seconds en route to victory and she eclipsed that run with 12.79 in the final.

Bruni saved her best for last as she snatched a dramatic Universiade gold.

She sat in second on countback behind United States' Rachel Baxter after both athletes cleared 4.41m.

After two failed attempts at 4.46m, it was Italy's Bruni who took the title with a final-effort clearance as Baxter failed for a third time.

Marcus Lawler claimed Ireland's first medal of the Universiade with bronze in 20.55 seconds.

Krystsina Tsimanouskaya of Belarus trailed in fifth after 100m but came through to win the women's 200m in 22.99.

Jessica-Bianca Wessolly of Germany clocked 23.05 to hold off compatriot Lisa Kwayie, finishing in 23.11, for silver.

Andriane Mandare won gold for Moldova by clinching the javelin title with a throw of 82.40m.

Edis Matusevicius from Lithuania was best of the rest with 80.07m as China's Qun Ma won bronze with a throw of 79.68m.

A throw of 18.31m saw Sarah Mitton claim shot put glory and a first gold medal at the Universiade for Canada.

Portious Warren of Trinidad and Tobago claimed silver with a 17.82m throw as Poland's Klaudia Kardasz took the final step on the rostrum with a throw of 17.65m.

The women's 3,000m steeplechase was won by Poland's Alicja Konieczek.