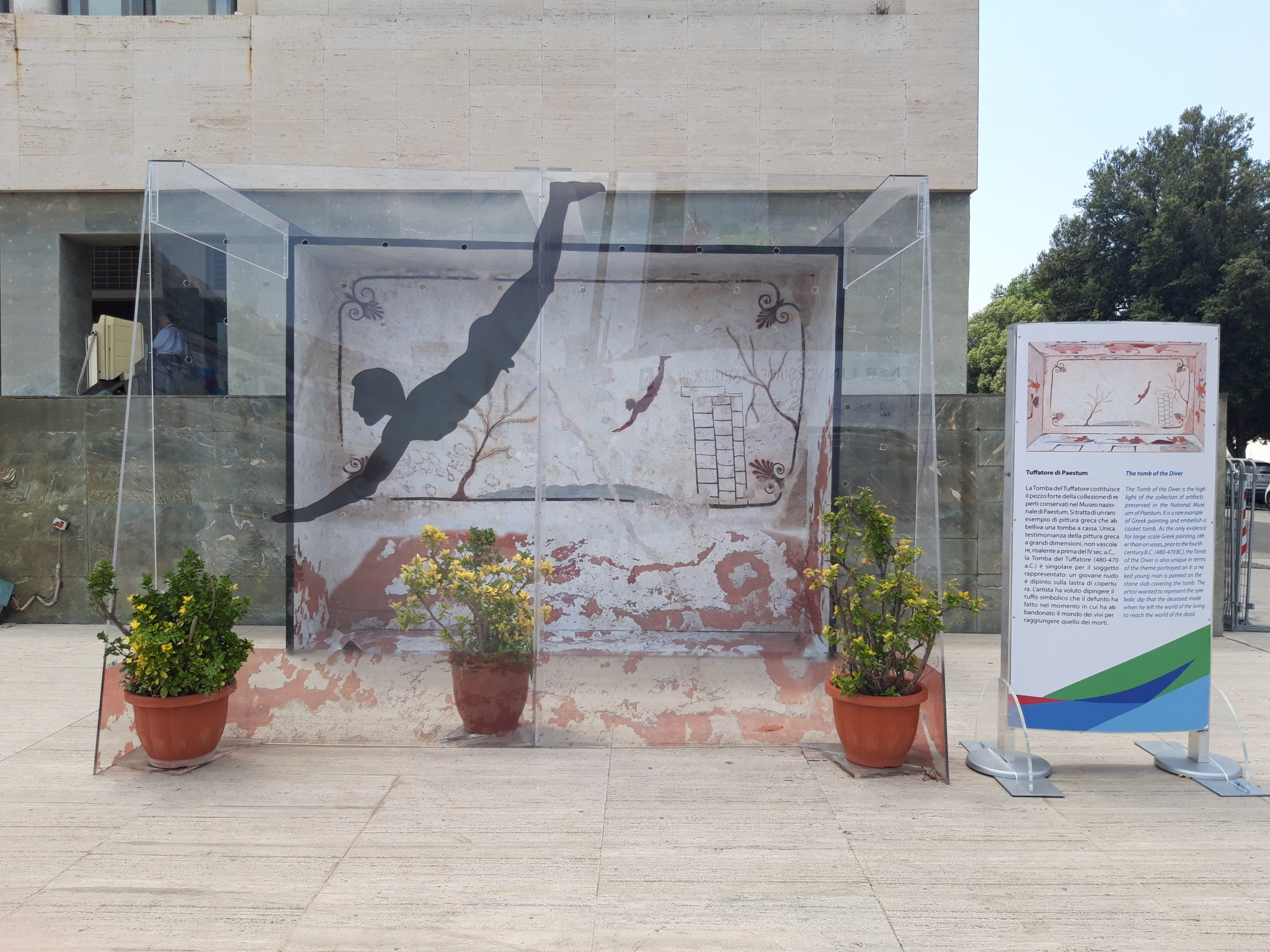 A concept artwork piece that brought together sports competition and Italian heritage at Mostra d'Oltremare during the diving competition will be displayed at the venue as a reminder of the 2019 Summer Universiade in Naples.

The painting, a recreation of "Paestrum's Diver", has been created by 22-year-old Neapolitan David Rummo as part of the Universiade's cultural sport presentation programme.

Yorgos Makrydakis, head of sport presentation for Naples 2019 said: "David was discovered by me.

"When I met him, he showed me his artwork.

"I admired his style and his passion for what he is doing.

"It was the period I was planning the sports presentation and entertainment for the Universiade.

"I was trying to find an idea to fit him into our acts because its unusual to have this kind of art in sport presentation.

"Live painting during competition – that has never happened before as far as I know."

Makrydakis said the idea to recreate Paestrum's Diver had come from its links to the region of Campania.

"I saw the Tomb of Divers, an archaeological monument that was built in about 470 BC and found in a Greek city of Paestum in Magna Gracie in what is now southern Italy," Makrydakis said.

"I thought to have him paint a diver during the diving competition, to honour the athletes who are here and also pay respect to that ancient painting."

After further discussions with Rummo and the International University Sports Federation (FISU) a commission was agreed and Rummo could be seen throughout the diving contests at Mostra d'Oltremare putting together his work.

Rummo said the painting, which has three elements – the diver in competition, the issue of anorexia and a spiritual element – was a concept piece aimed at fighting misconceptions about anorexia.

He added: "The diver brings an elegance to his work, in a monk-like style, while I have tried to depict the fight against anorexia.

"You can see the diver is very thin.

"This is done on purpose.

"Anorexia doesn't get enough coverage and it is a condition that is very hard to pull yourself out of."

The painting will be displayed at the venue as a reminder of the Universiade and the divers who performed in Naples this week.

"I have had many doubts as a painter before so to be selected is very important for me," Rummo said.

"It is a big moment for me.

"I’m still unsure of the best way to proceed but I probably need to go abroad for my art studies."

Throughout the Universiade, sports presentation projects have been seen, with singers performing at Mostra d'Oltremare and young dancers entertaining the crowds at PalaVesuvius, where Australia's women's basketball team defeated United States to retain their Universiade crown.

Makrydakis added: "In all the acts that we are having during the events, the sport presentation department wanted to show the traditional and the modern art of Napoli.

"We tried to plan and execute acts that are a mix of modern and traditional Neapolitan entertainment in the venues during our pre-game show and breaks during competition."