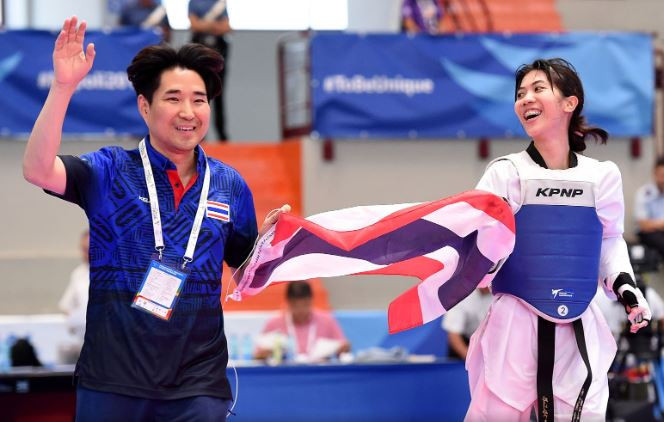 Panipak Wongpattanakit of Thailand added a Summer Universiade title to a growing medal chest as she won the women's under-49 kilograms taekwondo title at Palazzetto dello Sport in Casoria.

Wongpattanakit, due to turn 22 next month, burst onto the taekwondo scene with Grand Prix silver and bronze in 2015, before claiming bronze at Rio 2016.

She won the gold medal at last year's Asian Games in Jakarta.

Wongpattanakit has also claimed World Championship titles at Chelyabinsk in 2015 and Manchester earlier this year.

He recently earned a bronze medal at the World Championships in Manchester and defeated Mongolia's Tumenbayar Molom in the final here 22-19.

Magda Wiet-Henin of France is the women's under-67kg champion after defeating China's Yunyun Shan 9-0 in the gold medal match.

The bronze medals were awarded to Chinese Taipei's Kuan-Yu Chuang and Ana Ciuchitu from Moldova.

Brazil's Jhennifer Alves claimed gold in the women's 50 metres freestyle final but will have no time to celebrate her Universiade glory.

Tomorrow morning she is due to return home to Rio de Janiero before heading to Lima for the Pan American Games, which are due to begin on July 26.

At Piscina Scandone, she won in 30.73sec, holding off Britain's Sarah Vasey by just 0.08 seconds as Chelsea Hodges took the bronze medal for Australia.

"It was not my best time because I’ve had so much competition in Europe over this last month" Alves said.

"This is my sixth competition and I am doing the Pan Ams too.

Alves' busy schedule will then see her bid for a place at next year's Olympics.

"I am also working to be there in Tokyo and I am going to try for the 100m free," she said.

Gabrielle De Loof netted a fifth gold of the week as part of a quartet that won the women's 4x100m medley relay as Zach Apple also made it five golds in the men's equivalent.

It was a story of utter dominance for the Chinese in the table tennis as they claimed gold and silver medals in both the men's and women's doubles finals.

All pairs contesting the men’s and women’s doubles titles were from China, while all eight players will also contest the semi-finals of the singles draws tomorrow.

Siqi Fan and Yidi Wang won the women's doubles with a crushing 4-0 victory against compatriots Yan Guo and Rui Zhang.

The bronze medals were awarded to losing semi-finalists Yana Noskova and Valeriia Shcherbatykh of Russia and Japan's Minami Ando and Asuka Sasao.

Fumiya Igarashi and Asuka Sakai lost to Yu and Zhao as fellow bronze medallists Yuma Tsuboi and Yusuke Sadamatsu were defeated by Kong and Zhu.