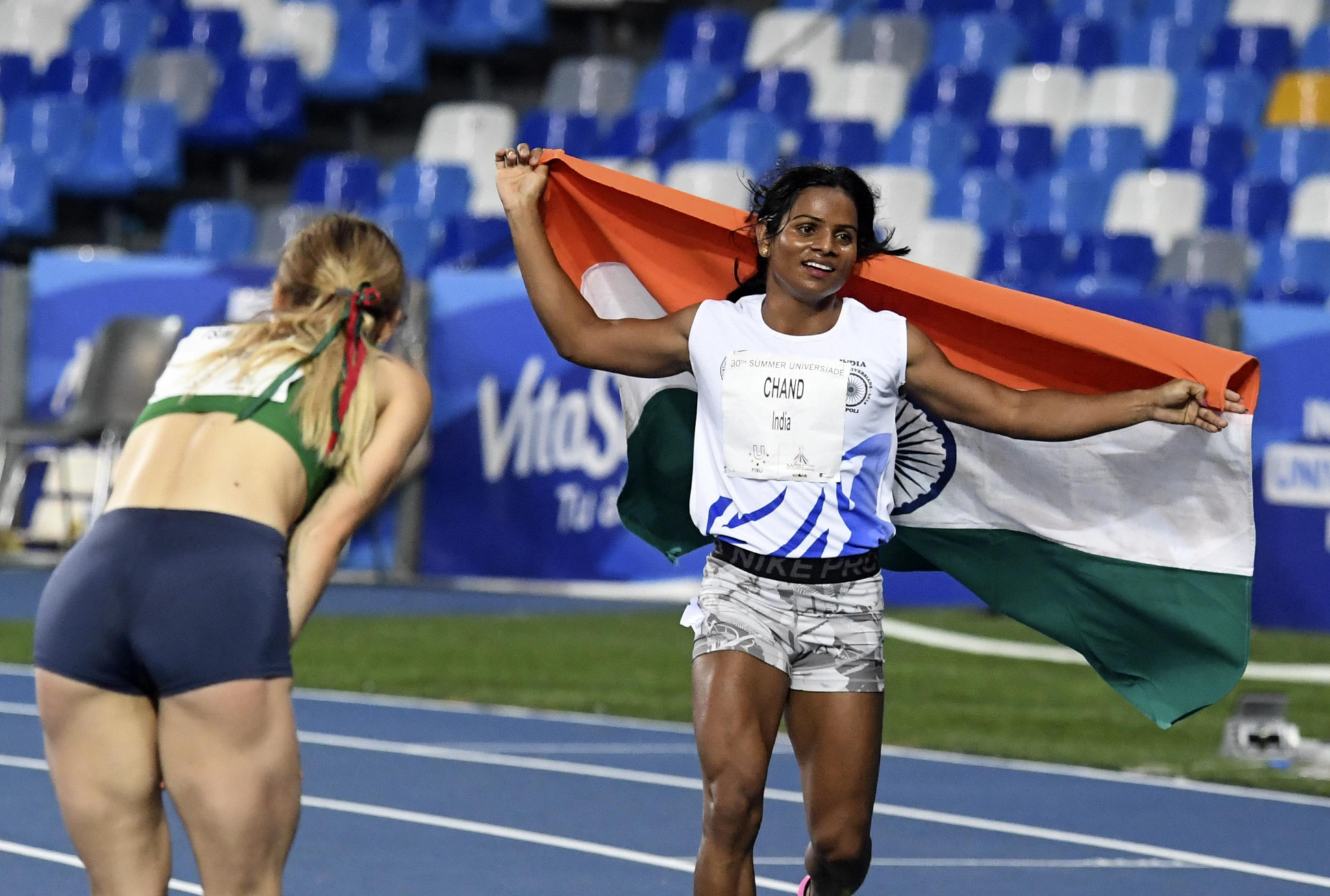 India's Dutee Chand won the 100 metres at the 2019 Summer Universiade here tonight - a victory against the odds following several years of finding herself in a spotlight she has not welcomed.

The 23-year-old crossed the line at the San Paolo Stadium in 11.32sec with Ajla del Ponte of Switzerland just missing out on gold with 11.33.

Lisa Kwayie of Germany was the bronze medallist in 11.39.

Chand was dropped by the Athletic Federation of India from its team for the 2014 Commonwealth Games in Glasgow, claiming that hyperandrogenism made her ineligible to compete as a female athlete.

She appealed to the Court of Arbitration for Sport in Lausanne, who in 2015 ruled that there was a lack of evidence provided that testosterone increased female athletic performance.

That allowed Chand to resume her athletics career and she competed at the 2016 Olympic Games in Rio de Janeiro and last year's Asian Games in Jakarta, where she won silver medals in both the 100m and 200m.

Her case was an early forerunner to the current controversy involving South Africa's double Olympic and treble World Championship 800m runner, who is currently appealing to the Swiss courts against a CAS ruling which backed an International Association of Athletics Federations policy of trying to restrict legally-produced testosterone in female athletes competing in middle-distance events.

Chand has publicly supported Semenya in her case, even offering legal advice from her own successful campaign.

More recently, Chand has made headlines in India by revealing she is in a same-sex relationship, something she claims is "my personal matter".

Compatriot Rodrigo Pereira do Nascimento was in third with 10.32, with South Africa's Chederick Van Wyk placed between the two Brazilians with a time of 10.23.

Italy's Daisy Osakue achieved a personal best of 61.69 metres to top the women's discus podium and earn her country another gold medal.

In the women's long jump, Ukrainian Maryna Bekh-Romanchuk was the victor, dominating throughout the final to record a winning distance of 6.84m.

Italy earned gold medals in the women's team sabre and men's team foil events as fencing at these Games came to an end here.

The crowd at the University Sports Centre in Salerno were delighted as the hosts claimed both titles available.

The Italian women's sabre team edged past France 45-41 in their final, while their compatriots in the men's team foil gold-medal clash enjoyed a more comfortable victory, crushing South Korea 45-22.

South Korea were awarded bronze in the women's sabre following a 45-29 win against Russia and the men's foil bronze was taken by Russia after they overwhelmed Australia 45-23.

Elsewhere, Nicolas Vasiliou achieved Cyprus's first medal of the Universiade, managing to ensure that it was of the golden variety.

He scored 56 hits in the men's shooting skeet final to finish first.

Italy's Chiara Di Marziantonio led throughout the women's skeet event to claim the gold medal, ending the final with 55 hits.

Kazakhstan's Zoya Kravchenko could not catch her but finished with 53 hits and a silver medal, while Hana Adámková of the Czech Republic completed the podium with 37.

These were the last of the shooting medals to be awarded at the Games.