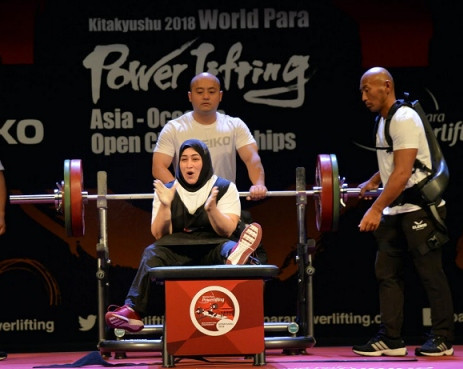 United Arab Emirates powerlifter Haifa Alnaqbi is set to be stripped of three bronze medals, including one she won at the Asian Para Games, after being suspended for six months by the International Paralympic Committee (IPC) for committing an anti-doping violation.

Alnaqbi, who competes in the women’s up to 73 kilograms class, returned an adverse analytical finding for clomifene and its metabolite hydroxyclomifene as well as tamoxifen metabolite 3-hydroxy-4-methoxy-tamoxifen in a urine sample provided on September 11, 2018.

This substance is included on the World Anti-Doping Agency (WADA) 2018 Prohibited List under the category S4 - hormone and metabolic modulators.

As a result of her violation, Alnaqbi was ineligible for competition for six months from September 11 last  year until March 10 in 2019.

All her results obtained from September 11 and onwards will be disqualified, including forfeiture of any medals, points, records and prizes.

Her medal from Kitakyushu in the open category will now go to Ireland’s Britney Arendse, while the regional bronze medal will go to South Korea’s Yang Eun Mi.

"The IPC would like to remind all athletes the principle of strict liability applies to anti-doping matters and that any athletes who need to take a prohibited substance for medical reasons should seek a Therapeutic Use Exemption," a statement from the body reads.

"As a signatory of the World Anti-Doping Code (WADC), the IPC remains committed to a doping-free sporting environment at all levels.

"The IPC, together with the International Federations and the National Paralympic Committees, established the IPC Anti-Doping Code to prevent doping in sport for Paralympic athletes, in the spirit of fair play.

"The IPC Anti-Doping Code is in conformity with the general principles of the WADC."

Powerlifting has a reputation for being the dirtiest sport on the Paralympic programme with a high number of positive positives.

World Para Powerlifting, the international governing body for the sport, expressed its support for WADA's Play True Day on April 10, emphasising its commitment to sport which is clean of doping.

Play True Day is devoted to clean sport and the fight against doping, and to raising awareness for the mission among athletes, coaches and spectators.