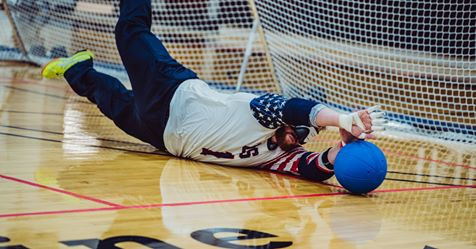 The quarter-final ties have been decided at the International Blind Sports Federation Goalball International Qualifier for the Tokyo 2020 Paralympics after the last day of pool play in Fort Wayne.

Four countries were battling for two remaining last eight places from Pool A of the men's tournament with Canada, Czech Republic, Sweden and Argentina all hoping to keep their bids alive.

Each side contested two matches each with the Czechs and Swedes eventually joining the already qualified Turkey and Lithuania in the next round.

Both countries endured mixed fortunes with the Czechs beating Argentina 9-8 before a 10-3 defeat to Turkey.

Sweden were beaten 7-4 by Canada but then pipped Greece 6-5.

Canada lost 8-7 to Lithuania in their second outing which meant they finished fifth in the pool and have been knocked out.

They ended one point behind the Swedes and two behind the Czechs as Argentina suffered a second defeat, 9-2 to Lithuania, to end sixth.

Turkey ended the pool on top with a 100 per cent record after enjoying a 12-2 win over Greece, with reigning Paralympic champions Lithuania second.

China, Ukraine, hosts United States and South Korea are the confirmed quarter-finalists from Pool B.

Each team played once with the Chinese, the Beijing 2008 Paralympic champions, winning the group after downing the US 8-3.

South Korea came fourth despite not being in action.

In Pool Y of the women's tournament Denmark earned their quarter-final spot after a tense wait.

They saw off Finland 8-5 before Greece and Ukraine both failed to win to secure their progression.

Canada beat Ukraine 6-2 and the Greeks could only draw 1-1 with the US.

Both North American sides had already qualified with the US topping the pile in front of Canada, with Finland third.

China finished top with an unbeaten record as they saw off the Israelis, who ended second, 6-3.

Australia beat Britain 5-0 to finish third in front of their opponents with Germany thrashing Spain 10-0 in a battle between two eliminated sides.

The quarter-finals will be played tomorrow.

In the men's event, Turkey will play South Korea and Ukraine will meet Czech Republic.

Hosts the US will play Rio 2016 winners Lithuania in a stand-out tie and China will lock horns with Sweden.

The American women will contest their last eight clash with Britain with the Chinese meeting Denmark.

Canada will play Australia and Israel will collide with Finland.

Matches are taking place across the Indiana Tech and Turnstone Center venues with the top two sides in each tournament reaching Tokyo 2020.