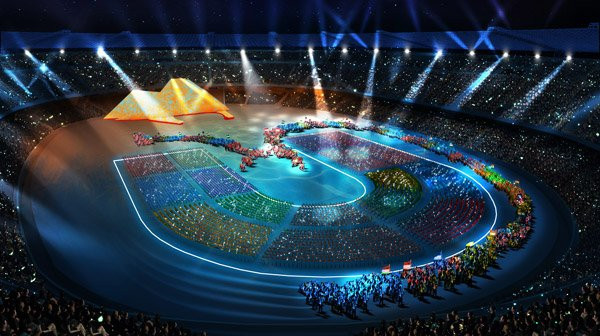 The identity of the final Torchbearer for Naples 2019 is a closely-guarded secret but organisers have promised a spectacular "contemporary emotions" ceremony which will incorporate traditions which date back to the first University Games in 1959.

That year, the flag of the International University Sports Federation (FISU) was flown in Turin.

A choir sang the student hymn "Gaudemus Igitur", a ritual which has been observed ever since.

From the outset, the Opening Ceremony has almost always taken place at night.

The example was not followed by the Olympic Movement until 1992, but now very few do not take place after dark.

The lighting of the cauldron will be the most keenly-awaited moment on Wednesday night, but in 1959 there was no Flame.

Instead, a scroll containing the oath of fair play, described as a "Bolla" was signed by the rector of Sassari University and then by his colleagues throughout Italy.

When it arrived in Turin’s Stadio Comunale, it was read by swimmer Paolo Pucci on behalf of the other competitors.

Students from the local universities had paraded in medieval scholastic costume as part of the festivities.

It was in 1961 that a Flame was lit for a Summer Universiade for the first time.

This was kindled in Varna and visited Bulgarian academic institutions before the cauldron was lit by pole vaulter Dimitar Khlebarov, who vaulted a new Games record to take gold a few days later.

The ceremony had been accompanied by gymnastic displays and when the Games returned to Sofia in 1977, gymnasts formed towers similar to those seen later in Moscow at the 1980 Olympics.

The Muscovites had used the 1973 Games as an opportunity to boost their Olympic bid.

Flag-waving, flash card displays were relatively unknown at the time but they became a familiar sight at major Games after that.

A feature of that ceremony was the traditional gift of salt and bread by student Tatiana Efimova to then FISU President Primo Nebiolo.

In the early years, organisers used football to attract spectators.

In 1959, it was the traditional costumed version but in 1965, host nation Hungary’s national team took on Juventus and five years later, Cagliari, including Luigi Riva, faced Sporting Lisbon in a match which followed the Opening Ceremony.

The Mexicans drew heavily on their ancient culture.

Five separate Torch relays set off from around Mexico and were united at Teotihuacan, just as the Olympic Flame had been a decade before.

The Flame was lit in a cauldron formed of giant representations of the letter U for Universiade.

When the Games went to Budapest in 1981, few argued with the choice of Nadia Comăneci as the lighter of the cauldron.

In 1983, the Games opened on the birthday of Diana, Princess of Wales and the British team smuggled flash cards of their own into he stadium to greet her.

By now the ceremony had become a major production and in 1987, viewers watched as a little girl visited the historic sites of Zagreb, before suddenly she appeared live with hundreds of others in similar dress in the stadium itself.

The transition from filmed sequences to live performance has been used by ceremony directors ever since.

More recently, the ceremony has become a full production number.

That was certainly the case two years ago when baseball star Chen Chin-Feng smashed a flaming ball into the air to launch the cauldron for the Taipei Games.

The stunt worked perfectly, which is more than can be said for Sheffield 1991.

A piece of local mined coal was ignited in the Torch carried by astronaut Helen Sharman.

When this fell out, she was left to light the cauldron with an empty Torch, although miraculously the Flame still burst into life.

At least that ceremony went ahead on schedule.

A torrential downpour in the wake of Typhoon Louise before Tokyo 1967 forced such a late postponement that some spectators had already taken their places in the stadium.

Naples 2019 has some terrific set-pieces which will include mermaids, light shows and even opera in what organisers have described as "a contemporary postcard of Naples" but they are ready for anything unexpected.

"Because of our knowledge of ceremonies, we always have plan B for anything major that might go wrong," said Naples 2019 executive creative director Marco Balich.

"Up to now we have not had mistakes.

"Let’s hope this tradition continues, but we have that plan B.