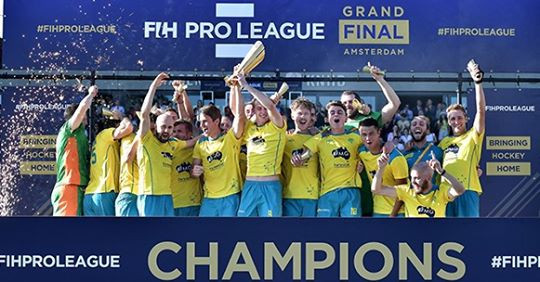 Victory also saw Australia, whose women had lost to The Netherlands in their final yesterday, leapfrog above Belgium and reclaim their position as the world's top-ranked team.

Australia were exceptional in the first two quarters of the title match, dominating a Belgium team that lost talismanic defender Arthur Van Doren early in the contest through injury.

It was a significant blow for the Red Lions, already missing injured captain Thomas Briels.

The Kookaburras deservedly took the lead in the ninth minute when Mitton fired home on the turn after Jake Whetton had brilliantly stolen possession from Belgium midfielder Victor Wegnez, a lead that was doubled just before the quarter-time break thanks to Ogilvie’s backhand rocket-shot.

Belgium improved in the second quarter and forced two fine saves from Tyler Lovell, but it was the Australians who extended their advantage as Govers scored from the penalty-spot after Mitton was fouled by Arthur de Sloover.

Belgium won a succession of penalty corners in the third quarter before finally getting the breakthrough before the end of the period.

Luypaert’s penalty corner drag-flick gave Belgium hope, with Hendrickx making it 3-2 with a strike three minutes from the end, leaving the Australians hanging on.

#FIHProLeague #GrandFinal@Kookaburras are the first men's #FIHProLeague Champions!!!
The men in Green and Gold also become the World number 1 men's side in Hockey!
They defeat @BELRedLions 3-2 in a thrilling match to clinch the FIH Pro League title!@HockeyAustralia pic.twitter.com/cs5ddPjdED

"We started off red hot by scoring three goals, which was great, but didn’t finish off too well and they showed their class towards the end.

"It’s been exciting, every game has been interesting.

"It’s been a quality competition, as shown by this weekend, which has been top class."

Earlier, hosts The Netherlands secured third place with a 5-3 victory over Britain.

Jeroen Hertzberger and Mirco Pruijser each scored twice for the Dutch with their other goal coming from Mink van der Weerden,

Zach Wallace, Henry Weir and Phil Roper scored for Britain, who will be unhappy at failing to take advantage of leading 2-1 and then 3-2.

Belgium’s Tom Boon won the best goal of the FIH Pro League Grand Final event thanks to his stunning solo effort against The Netherlands in the semi-finals on Friday (28 June).