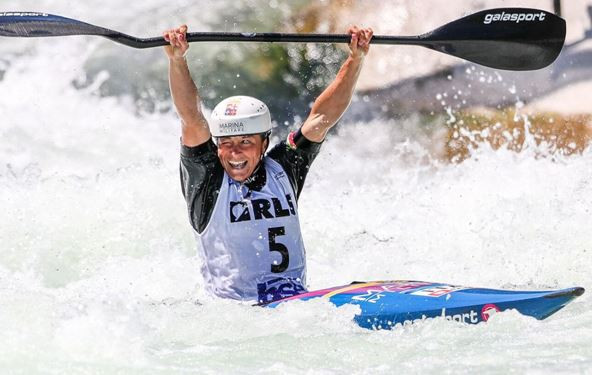 Horn has consistently reached the finals at World Cup and World Championship events and the 28-year-old took her first gold on the Tacen channels in Slovenia's capital.

Having posted the quickest times in the heats and semi-finals, she secured gold with a rapid 94.13 seconds run.

“It helps that I am in love with this place, the people are so nice here, you have a great feeling, so I just love paddling,” Horn said.

“In London I did a great semi-final and was convinced I could also do a great final.

"But I put so much pressure on myself that I missed a gate.

"Pressure is sometimes too much for me.

“I have a new coach now, we are working on being more self-confident and learning that even if you do a small error, you can still do a good run.”

Slovenia's Eva Tercelj had to settle for silver in 94.39 with Viktoriia Us of Ukraine third on 95.04, the latter handed a two-second penalty for a gate touch.

Australia's Jessica Fox, a three-times world champion, failed to reach the final after missing a gate and picking up a 50-second penalty.

Colazingari not only claimed a first gold but also a first World Cup podium.

The 26-year-old had showed promising signs in winning the Under-23 Canoe Slalom World Championships but had failed to make an impact on the senior tour.

Finishing in a time of 87.48, the Italian beamed on the podium.

“This is a result of the hard work we did during the winter.

"I hope this is the start and not the end.”

Slovenia's Anže Berčič was second in 88.84 seconds with Alexander Slafkovský third on 89.56.