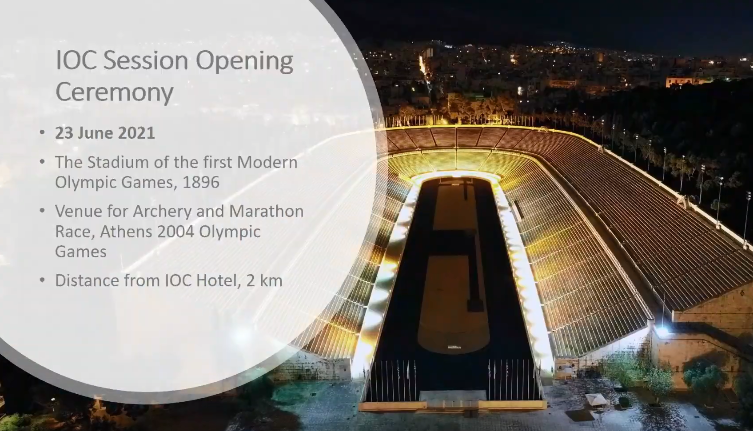 Athens has been confirmed as the host city for the 2021 International Olympic Committee (IOC) Session as India submitted a bid to stage the event in 2023.

Hellenic Olympic Committee (HOC) President Spyros Capralos, elected an IOC member at the Swiss Tech Convention Center in Lausanne yesterday, presented the Greek capital's plan to host the event to the Session as the city was the only candidate.

Thomas Bach could be re-elected in the birthplace of the Modern Olympic Games at the 2021 meeting as the Presidential vote will be the leading item on the agenda.

It will mark the end of Bach's first eight-year term and he is expected to seek a second four-year mandate.

Capralos revealed the 2021 Session would include a visit to Ancient Olympia as members will be flown to the site on June 27, the day after the IOC Session concludes.

The IOC is expected to foot the bill for the cost of the flights to Araxos.

Capralos said the trip will include a visit to the Ancient Stadium and the Athens 2004 museum.

The IOC Executive Board are scheduled to meet from June 21 to 22 before the Opening Ceremony of the Session takes place at the stadium of the first Modern Olympic Games the following day.

The Session itself is scheduled for June 24 to 26 at the Peace and Friendship Stadium, located around 10 kilometres from the planned IOC hotel.

It will be the eighth time it has hosted the IOC Session since staging the second in 1896, when Pierre de Coubertin was elected President.

But it will be the first time Athens has staged the IOC Session since 2004, when it was held on the eve of the Olympic Games.

That event was memorable for the intense lobbying which went on between cities bidding for the 2012 Olympic and Paralympic Games, most notably London and Paris, less than a year before the event was awarded to the British capital.

Normally, the Summer Olympic Games would have been awarded at the 2021 Session but the decision to do a dual award two years ago to Paris 2024 and Los Angeles 2028 means that is no longer the case.

Confirmation of Athens as the 2021 host came after India submitted a formal bid for Mumbai to stage the 2023 Session.

The candidacy from India was presented to IOC President Thomas Bach by Indian Olympic Association head Narinder Batra, elected as an IOC member alongside Capralos, and Nita Ambani, who also sits on the body.

The 2030 Winter Olympic Games are due to be awarded at the 2023 Session but it is possible that might change after significant reforms to the bidding process were passed.

India has only hosted the IOC Session once, in 1983 in New Delhi.

"The 2022-2023 period happens to be the 75th year of Indian Independence and what better way for Indian sports to celebrate the occasion by having the entire Olympic family and community in India," said Batra.

It was also confirmed, as expected, that Lausanne will stage a Session during the Winter Youth Olympic Games in January.

The Session is set to be held at the IOC's new headquarters, Olympic House, inaugurated on Sunday (June 23).

The event is due take place on January 10 to 11, with the 2020 Winter Youth Olympics set to begin on January 9.