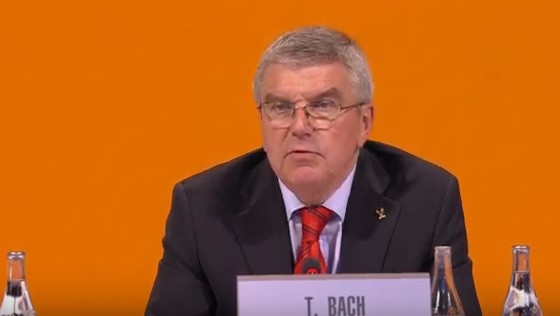 Sir Craig directly asked Bach for an update regarding the criminal investigation in France and the status of "one sports official" in Senegal - Papa Massata, son of former International Association of Athletics Federations (IAAF) President Lamine - and whether there had been any progress following a presentation on Dakar 2022.

The intervention from the World Anti-Doping Agency President at the IOC Session came after reports surfaced yesterday that Lamine Diack and Papa Massata Diack are to stand trial in France.

Lamine Diack, who stood down as an IOC honorary member in 2015 following his arrest in France, faces charges of corruption, influence-trafficking and money laundering, according to Agence France-Presse.

His son Papa Massata Diack, a disgraced former marketing consultant of the IAAF who refuses to leave the 2022 Youth Olympic Games host country, is set to face trial for complicity in corruption and money laundering, the French news agency reported.

Among the accusations set to be levelled against the Diacks is that they helped cover up positive drugs tests involving Russian athletes in return for cash.

Other allegations levelled at Lamine Diack and Papa Massata Diack include that they were involved in corrupting the Olympic bid process by accepting cash to help influence the decisions to award the 2016 Games to Rio de Janeiro and 2020 to Tokyo.

Bach, however, claimed the case "had nothing to do with the Youth Olympic Games", despite Papa Massata's influence in Senegalese sport.

The IOC President has previously issued a personal plea to the Senegalese Government to cooperate with the French investigation in a letter to Senegal President Macky Sall.

Bach said Sall's response confirmed Papa Massata would not be extradited to face charges in France in connection with a corruption scandal linked to the award of the 2020 Olympic and Paralympic Games to Tokyo.

Papa Diack has been on Interpol's most wanted list since December 2015 but remains in Dakar as the Senegalese Government refuses to extradite him to France.

Mamadou Ndiaye, Senegal's IOC member and head of Dakar 2022, claimed that the court "will take its decision but we cannot extradite our own citizens".

"I have written a letter to the President of Senegal, he has responded within days that the Senegalese are cooperating with the French authorities while respecting the laws which apply to citizens of Senegal," Bach told Sir Craig.

The reports the Diacks are due to stand trial were seemingly timed to coincide with the IOC Session taking place here this week.

In the latest development today, reports following a joint investigation by Mediapart and British newspaper The Guardian claimed Papa Massata Diack discussed a transfer of money with Sheikh Khalid bin Khalifa Al-Thani just before two bank transfers linked to Doha's failed bid for the 2017 IAAF World Championships and Tokyo's successful bid for the 2020 Olympics and Paralympics were made.

Citing leaked emails, the two publications reported the discussions took place prior to the transactions, which are at the centre of the criminal probe.

These transfers were allegedly made on October 13 and November 7 in 2011 for a total amount of $3.5 million (£2.8 million/€3.1 million) to company located in Senegal, Pamodzi Sports Consulting, owned by Papa Massata Diack.

"This is a judicial process and we are not a judicial organisation, we have done what we have been asked to do," IOC spokesperson Mark Adams said.

"We have spoken to the President of the country and I think we have to let justice take its course.

"Justice takes a slightly different course to how sporting organisations work, we have to let them do their due process and do their work properly.

"We are partie civile, we talk to the French justices quite regularly and if there are any developments, you will discover them."