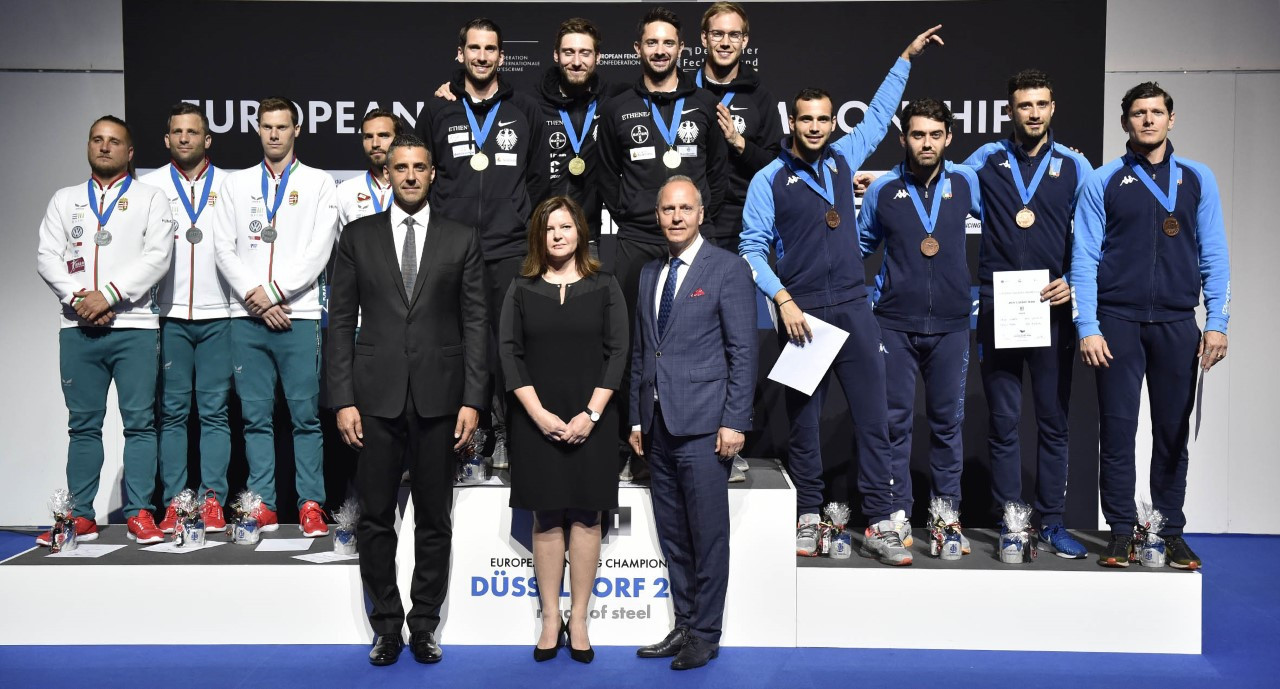 Hosts Germany ended the European Fencing Championships in Düsseldorf with victory in the men's team sabre, while top seeds Poland triumphed in the women's team épée.

Germany, seeded fourth at the tournament held at Messe Düsseldorf, claimed their first European title at the 2019 edition on home soil as they beat Hungary in the final, after Italy claimed the bronze medal by beating Romania in the third place playoff.

Following a bye through the first round, Germany beat France 45-40 to set up a mouth-watering semi-final tie with top seeds Italy.

The Germans led 15-6 after the third leg but a typically strong comeback put the Italians 30-28 up with three legs remaining.

Germany fought back but trailed 39-40 going into the anchor leg before a great fight followed which saw Benedikt Wagner take the host nations though to the final, 45-42.

In the other half of the draw, sixth seeds Romania took third seeds Russia out in the quarter-finals but then lost to Hungary, the number two seeds, for a place in the final.

Italy eased into the lead in the bronze medal playoff against Romania and put in a solid and professional display to take the title 45-35.

The final began with a very vociferous home crowd cheering their team onto the piste but Hungary made the much better start to quieten them.

They led 15-6 at the beginning of the fourth leg, however Germany rallied with strong performances from Matyas Szabo and Max Hartung.

Szabo and Hartung reeled in the Hungarian team in and handed over a 40-34 lead to their anchor, Wagner.

Hungary’s double-Olympic Champion Áron Szilágyi came on to face him but Wagner and Germany were not to be outdone, taking the gold and the European title 45-43.

In the women's team épée, Poland came from behind to defeat Russia in the final after Italy beat France in the bronze medal playoff.

Having won the first World Cup event at the start of Tokyo 2020 qualification, Poland were the top seeded European team, and eased through their semi-final with France 45-37.

In the other half of the draw, Russia advanced to the final with a narrow 36-35 win over Italy.

Italy pulled away from France in the fourth leg of their bronze medal match and never looked back, taking it 45-38.

The final was a tight affair; Lyubov Shutova came on to start for Russia and received a passivity penalty - in which a fencer is penalised for not being aggressive or attacking enough - before levelling at 2-2.

Passivity was also called in the second match, this time it was Magdalena Piekarska of Poland who received the penalty.

With the scores level in the third, both teams were penalised again and a second "P-red" card was then given to both teams, but Russia were able to get into the lead, putting all the pressure on Poland to score a hit, as any further penalty would have resulted in the match ending in their defeat.

Poland were, however, able to level the score, before Ewa Trzebińska struck to take Poland to a dramatic 27-26 win and the European title.

Focus now turns to the final event of the fencing season, the World Championships, due to start in Budapest on July 15.