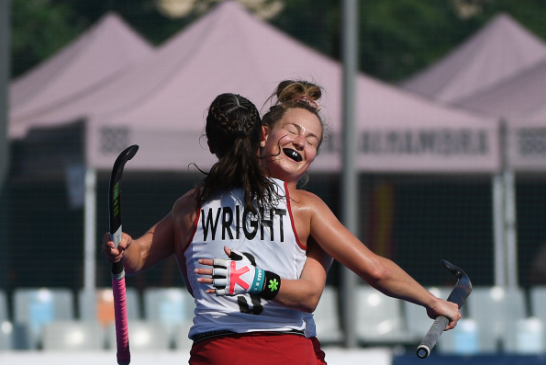 Hosts Spain must go through the crossovers at the International Hockey Federation Series Finals in Valencia, Spain after finishing behind Canada in their pool on goal difference.

Spain crushed Namibia 10-1 but it was not enough and they now face a playoff against Wales in order to reach the semi-finals.

Earlier, Canada – who thumped Namibia 17-0 yesterday – set Spain their target with a 3-0 victory over Belarus.

They took the lead on 15 minutes through Stephanie Norlander, but did not add to that until the final eight minutes, when captain Kate Wright scored a second and Norlander doubled her personal tally.

That result, combined with the Canadians' immense victory over the Namibians, meant Spain had to beat the African side by 14 goals or more to top Pool A.

That task became even harder when Namibia took a shock lead after just seven minutes, Joane van Rooyen scoring their first goal of the competition.

Stung, Spain set about trying to score the 15 they needed to progress.

However they ran out of time and must now take the extended route through the knockout stages.

Earlier, South Africa booked their semi-final place with a 7-0 trouncing of Thailand.

After Lilian du Plessis opened the scoring in the third minute, the Thais managed to hold out for 20 minutes before conceding again, Nomnikelo Veto doubling the advantage before Dirkie Chamberlain made it 3-0 before halftime.

Chamberlain got her second and South Africa's fourth early after the interval, with du Plessis also doubling her personal tally before Quanita Bobbs scored number six.

Lisa-Marie Deetlefs added a seventh in injury time, as South Africa eased to the victory they required to guarantee top spot in Pool B, while Thailand will take on Namibia in the seventh-place game.

Italy will have to go through the crossovers in order to reach the final four, despite an impressive 4-1 victory over Wales.

They took control of the game with two goals in the eighth and ninth minutes through Maryna Vynohradova and Eugenia Bianchi, respectively, and led by three at the break when Celina Traverso scored just before halftime.

Wales pulled one back on the 47th minute through Sophie Robinson but Lara Oviedo secured the win to earn Italy what looks on paper to be an easier playoff match-up.

They face Belarus for the right to play Canada while Wales take on Spain with the winner set to lock horns with South Africa.