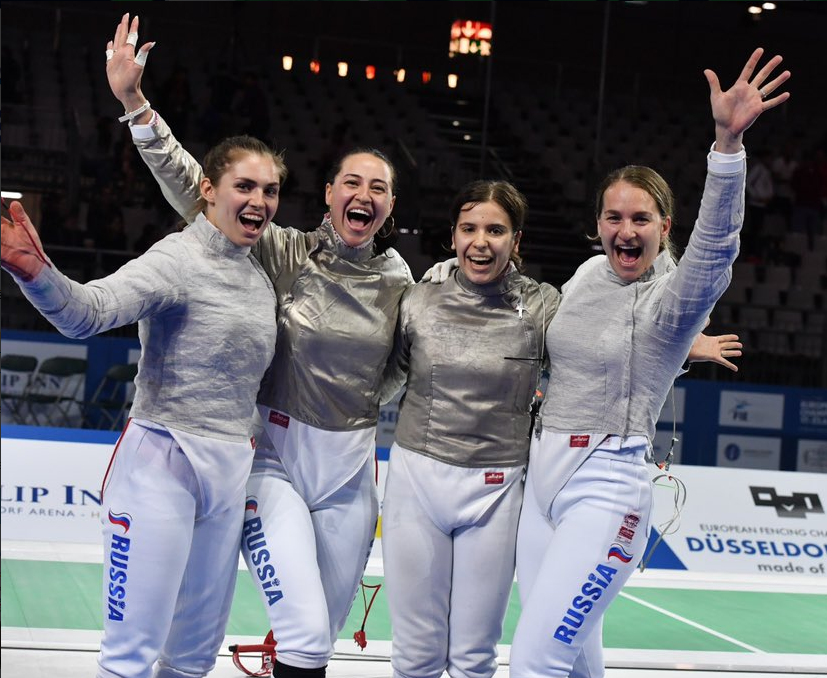 Russia retained their crown in the women's team sabre at the European Fencing Championships, while France regained the men's foil title they won two years ago.

Two of the Russian team – Sofia Pozdniakova and Sofya Velikaya – have won their second titles in succession, having been joined by new team mates Olga Nikitina and Yana Egorian.

Egorian and Velikaya had also been part of the Rio 2016 Olympic gold medal-winning team and showed their quality today in Düsseldorf.

They cruised to the crown, winning three of their four bouts by more than 10 points, the closest encounter being with Italy in the semi-final, which they won 45-39.

Russia beat Hungary 45-34 in the final, earning Velikaya a measure of consolation after her disappointment in the individual competition earlier this week.

Velikaya has recently returned to competitive action in a bid to win the Olympic title at Tokyo 2020, after silver medals at the past two Olympics.

The world number one and 2018 individual champion lost in the semi-finals of the individual foil this year at Messe Düsseldorf.

France earned the bronze medal after beating Italy 45-42 in the third-place playoff.

They came into the event as strong favourites but the young Hungarian team proved to be tough opponents in the semi-final.

Hungary progressed 45-40, demoting France to the bronze medal play off.

Le Pechoux and Lefort – a semi-finalist in the singles this year – were part of that squad, as well as the team which won silver at the Rio 2016 Olympics. and used their experience to thrash home favourites Germany 45-26.

France were in excellent form throughout the Championships and won all four of their bouts with ease, including a semi-final crushing of Russia, 45-29.

Top seeds Italy had a bye through the first round before beating Ukraine comfortably 45-28 to make the semi-finals.

In contrast, their semi-final opponents Germany had to battle past Spain 45-38 and Poland 45-39 to get to the top four.

Germany had a great start in the semi-final against the Italians and delighted the home crowd by seeing it through to win 45-40.