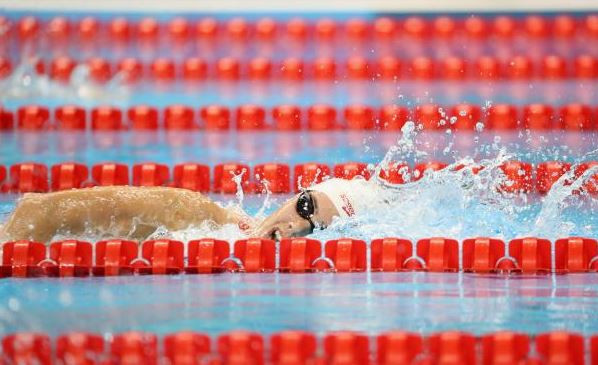 Ami Omer Dadaon made it two gold medals in two days as world records continued to fall on the second day of the World Para Swimming World Series in Berlin.

While he did not make the podium, there was a world record for 15-year-old S3 swimmer Josia Topf of Germany, who clocked 3.59.44.

Britain's Alice Tai and Canadian Aurelie Rivard were overshadowed in the women's 100m freestyle by Dutch swimmer Liesette Bruinsma, who took the top step on the podium.

Tai and Rivard have been rivals for World Series success throughout 2019 but had to settle for a share of silver against S11 swimmer Bruinsma, who collected 937 points for first place.

S8 swimmer Tai and Rivard, an S10 competitor, both scored 877 points, each receiving a silver medal, with no bronze awarded.

Tai was not to be too downhearted, though, as she swam a world record for gold in the women's 50m backstroke.

What a meet this is becoming for Britain's Alice Tai!!

Compatriot Reece Dunn made it a double success for Britain in winning his 100m freestyle final in a world record.

Not to be outdone by British star Dunn, multiple Paralympic champion Ihar Boki of Belarus added another gold medal in the men's 50m backstroke.

There was also a world record for American Robert Griswold, who became the first S8 swimmer to duck under 30 seconds.

Griswold claimed bronze behind Boki but in clocking 29.97, earmarked himself as a star in his category.

Gina Böttcher brought joy to the Berlin crowd as she won gold for Germany in the women's 150m individual medley.