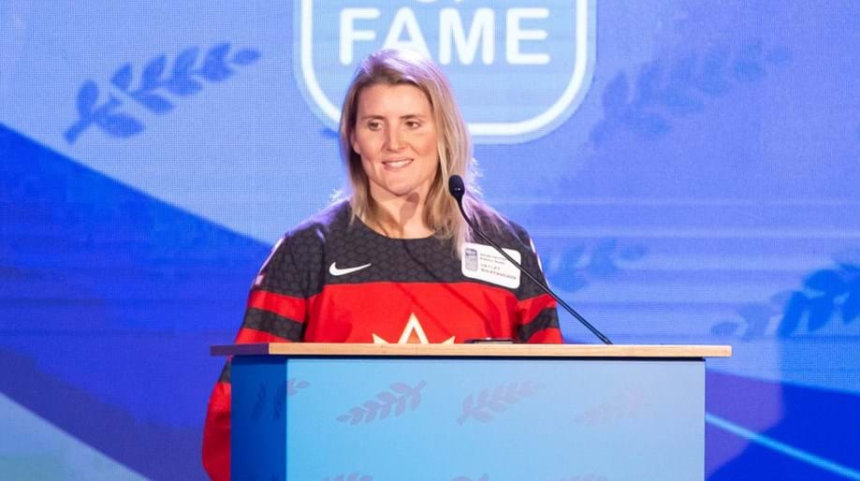 Former Canada centre Hayley Wickenheiser admitted it had been "a massive honour" to be inducted into the International Ice Hockey Federation (IIHF) Hall of Fame.

The 40-year-old is the leading scorer in international women's hockey history having racked up 51 points at six Winter Olympic Games and 86 at the IIHF Women's World Championship.

Wickenheiser, who won four straight Winter Games gold medals between 2002 and 2014, was honoured in Bratislava in Slovakia alongside Miroslav Satan and Zigmund Palffy from the host nation, the United States' Mike Modano and Sweden's Jorgen Jonsson.

"I don't think it’s something you grow up thinking about in Canada," Wickenheiser said, when asked if she could have envisaged entering the Hall of Fame.

"You think about Stanley Cups and the NHL (National Hockey League).

"But certainly on the international stage and during my career as it progressed, you realise what a huge thing it is to play in the World Championship.

"Maybe we don’t historically appreciate it as much in Canada but in other countries around the world, to win a World Championship or compete in an Olympic Games is the number one honour.

"It’s a massive honour to be inducted in Slovakia with some of the great Slovak players.

"To see the emotion around that is very nice."

A member of the International Olympic Committee after being elected to the Athletes' Commission at Sochi 2014, Wickenheiser is also assistant director of player development at Toronto Maple Leafs.

Often viewed as the greatest player to play the women's game, she has enjoyed witnessing the increasing profile of her sport in recent years.

"I smiled today because I see how far we’ve come," Wickenheiser said.

"I think about how times have changed a lot in the women’s game.

"I appreciate all the women that came before me that battled their way through.

"It’s much easier now to be a little girl growing up anywhere in the world to play hockey, especially in North America.

"It was kind of a full-circle moment that way. I’m proud of how far it's come."

At the beginning of May, some 200 players announced they were refusing to compete in a North American league until resources and salaries improved.

Wickenheiser backed the stance taken by the players.

"I’ve been saying this for years - it is what had to happen," she said.

"The players had to take a stand or nothing was going to change.

"It will have to be a league backed by the NHL.

"The NHL has a plan and they need everybody else to get out of the way and allow them to execute and do the job that needs to happen to put the best players on the ice.

"There’s going to be some bumps but by the time another league is formed, it will finally be the league that everyone has wanted for a long time."