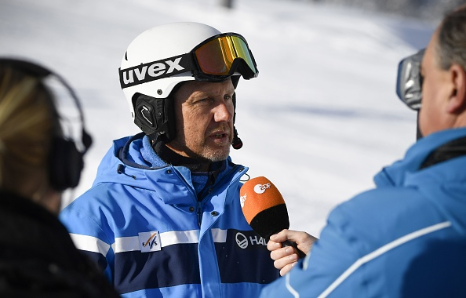 After 14 seasons in the position, Skaardal has taken over as FIS Alpine technical expert.

Gerdol has served as the FIS Alpine Continental Cup coordinator since 2014 and is fluent in English, French, German, Italian, Slovenian and Spanish.

Prior to joining the FIS, he was race department manager in Tarvisio in Italy.

It was there that he also led the technical organisation of the FIS Women’s World Cup competitions in 2007, 2009 and 2011, the FIS World Junior Alpine Skiing and Nordic Championships in 2002 and 2007 respectively, the 2003 Winter Universiade, annual FIS European Cup competitions and numerous FIS races.

"I’m very pleased and honoured that FIS believe in my skills and gave me the opportunities to make a big step forward in my career," Gerdol said.

"Taking over Atle Skaardal’s position as chief women's race director is a big challenge but I’m highly motivated to keep the high quality Alte and the team built over the past 15 years.

"Taking part in the summer inspections will be my first step, so I will get in touch with all the organisers I don’t know yet and prepare the path for the next season at the best [level]."

"I will listen and observe what the market and the stakeholders are requesting with the purpose to create long-term value into the ladies World Cup," he added.

This is considered particularly important with Beijing 2022 and other major events coming up, since a considerable amount of interaction is necessary during the competition period when the race directors are not available, such as leading study groups.

A key task with which Skaardal has already been involved since its inception is leading the FIS Alpine Skiing Injury Surveillance System and the various safety projects in collaboration with the race directors.

The transition between Skaardal and Gerdol has already started, with the latter already attending all meetings with the Women’s World Cup team.

The change comes hot on the heels of Italy’s Sandro Pertile being named as the replacement for Austria’s Walter Hofer as FIS race director for ski jumping.

Pertile has been fully involved with the organisation of ski jumping in Italy and internationally since 1997, including as ski jumping sports manager for the 2003 FIS Nordic World Ski Championships in Val di Fiemme and the Organising Committee of the Turin 2006 Winter Olympics.

He is one of the most experienced technical delegates having had more than 100 assignments since 2002 at World Cup, World Championships and Olympic level, and being Italy's representative on the FIS Ski Jumping Committee since the same year.

For the past five years, Pertile has also organised the FIS development programme Nordic training camps and activities, and he was Nordic director of the Italian teams from 2014 to 2018.

During most of the 2019 FIS Summer Grand Prix and 2019-2020 FIS World Cup competitions, Pertile is assigned to the technical delegate assistant position in order to undertake a hands-on transition from Hofer.