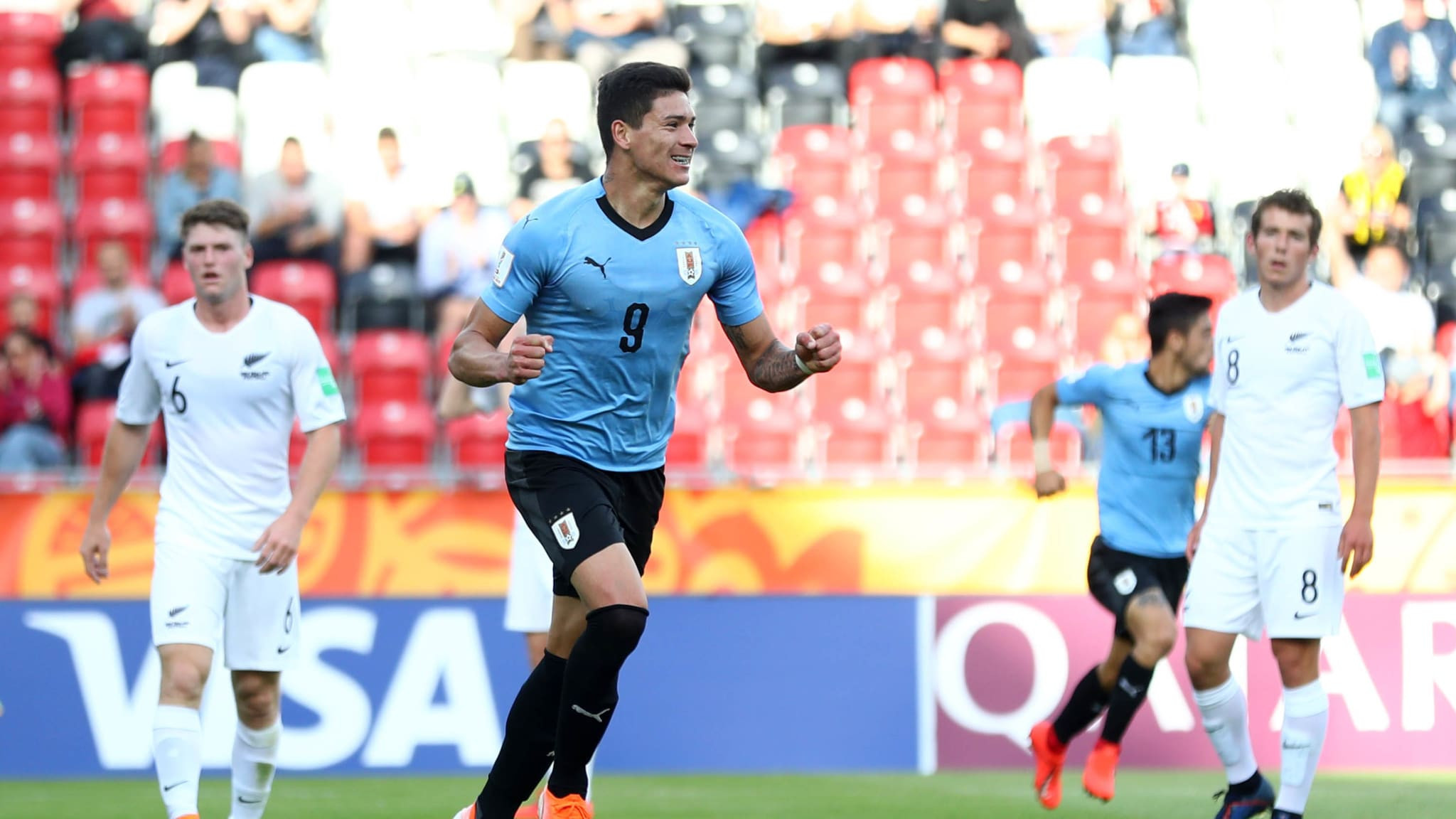 Uruguay ended Group C with a 100 per cent record after earning a 2-0 victory against New Zealand at the FIFA Under-20 World Cup in Poland.

Both sides went into the match at Lodz Stadium already assured of round-of-16 berths and they sought to rest players with New Zealand making nine changes and Uruguay eight to the teams that started on Monday (May 27).

Uruguay looked the more threatening going forward in the first-half and their pressure was rewarded five minutes before the break when Darwin Núñez’s powerful strike got the better of goalkeeper Cameron Brown.

The South Americans then sealed victory in second-half injury-time through Brian Rodríguez, ensuring they signed off the group stage in style with three wins out of three.

History was made in today's other Group C match as Erling Håland scored nine times to shatter the record for goals in a FIFA Under-20 World Cup match and help Norway thrash Honduras 12-0 in the biggest victory in the competition’s history.

Håland, the son of son of former Nottingham Forest, Leeds United and Manchester City defender Alf-Inge Håland, outranked Adaílton, who scored six for Brazil in a 10-3 win over South Korea in 1997.

The 18-year-old's first came in the seventh minute and the Red Bull Salzburg striker already had four to his name by half-time before adding a further five after the break.

Two red cards for Honduras, going to Axel Gomez and Everson López, made matters worse for them as they crashed out of the tournament emphatically.

Norway will have to wait to find out their fate in the competition.

Erling Braut Håland (18) versus Honduras at the #U20WC:

They hope their goal difference will be enough to see them finish as one of the top four third-placed sides.

In Group D, a superb 76th-minute Timothy Weah goal earned the United States a 1-0 win over Qatar at Tychy Stadium, putting them through to the knockout phase as runners-up and ending their opponent's faint hopes.

The are set to face the winners of Group E - either France or Mali - in the round of 16.

The other Group D match saw Ukraine and Nigeria play out a 1-1 draw at Bielsko-Biala Stadium.

Already guaranteed a place in the knockout stage, the result earned the Ukrainians top spot in the section with seven points.

A superior goal difference means Nigeria will also continue their campaign, taking four points from three matches and being confirmed as one of the four best third-placed teams.

Danylo Sikan headed home from close range in the 30th minute to give Ukraine a 1-0 lead.

Goalkeeper Andriy Lunin saved Muhamed Tijani's penalty seconds before half-time, but could not duplicate the feat when the forward earned another spot-kick in the 47th minute.

The tournament is due to continue tomorrow with the conclusion of Groups E and F.