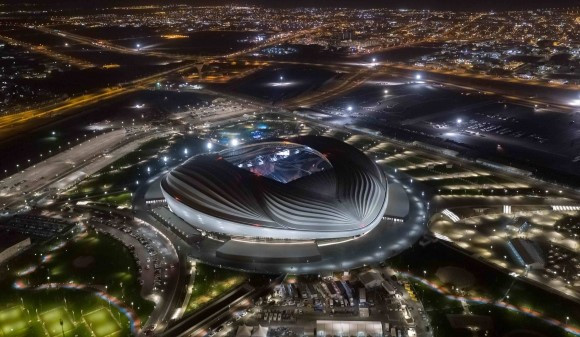 In the presence of the Emir of Qatar, Sheikh Tamim bin Hamad Al Thani, a crowd of 38,678 spectators witnessed the venue’s inauguration ceremony, which was followed by the crowning of Al-Duhail as the winners of this year’s Amir’s Cup after a 4-1 victory over Al Sadd in the final.

"The stadium is extraordinary," Infantino said.

"I was here seven months ago during the final stages of construction.

"I am delighted to see how beautiful and functional it is, but I am not surprised.

"Qatar is working very hard to excel when it comes to every aspect of the tournament.

"Today, we have seen even more proof of their capability and commitment, and we will keep working side by side towards all other milestones that will come our way until 2022."

With three and a half years to go before the next FIFA World Cup, Qatar has delivered two of the eight stadiums proposed to host the tournament.

While Khalifa International Stadium was built in the 1970s and reopened after renovation in 2017, Al Janoub Stadium is the first venue to be completed from scratch.

It was designed by late British-Iraqi architect Zaha Hadid.

"This venue will wow football fans flocking to Qatar in 2022 and the fact such an astonishing project has been designed by an Arab woman makes it unique," Samoura said.

"Besides offering a beautiful and modern stage for footballers to shine, Al Janoub will also inspire girls across the region to dream big, work hard and achieve great things."

Al Janoub Stadium is set to stage matches up to and including the quarter-finals of the 2022 FIFA World Cup.

In legacy mode, it will be reduced to a 20,000-seater venue and become the home of local football team Al-Wakrah Sports Club.

An innovative cooling system and retractable roof will enable the stadium to be used all year round.

"The stadiums are the beating heart of any World Cup," France’s Youri Djorkaeff, a 1998 FIFA World Cup winner who attended the opening match together with several other football icons, said.

"It truly makes a difference to play football in an inspiring venue and I am sure Al Janoub Stadium will be one of those unforgettable ones.

"Years from now, I can see players thinking back to the matches that were held here and cherishing the memories of having played in such a stunning arena."

The match between Al-Duhail and Al Sadd also took on added significance as 2010 FIFA World Cup winner Xavi Hernández, the Spaniard who has played for Al Sadd since 2015, recently announced that he would retire at the end of the season.

"Xavi is among the greatest midfielders I have seen," Infantino added.

"His achievements with Barcelona and Spain place him in a very select group of absolutely legendary players.

"Over the past few years here in Doha, his leadership has become even more evident as he has supported the younger players and even predicted that Qatar would win the AFC (Asian Football Confederation) Asian Cup when few believed that was possible.

"We couldn’t be happier with having him in the next FIFA World Cup host country, inspiring people and contributing towards Qatar’s goal to succeed both on and off the pitch."

The size of Qatar 2022 is set to be expanded from 32 teams to 48 after the FIFA Council agreed the idea was "feasible" at a meeting in Miami in March.

Having analysed a feasibility study, the Council agreed broadening the event could work, so long as countries other than Qatar, the current sole hosts, agree to help.