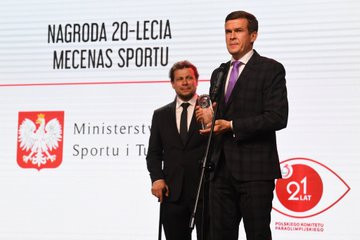 According to a well-placed source, the young Polish Sports Minister beat his chief rival, the Dominican Republic’s Marcos Diaz, 10-8 in Tuesday’s vote among public authority representatives on the WADA Foundation Board.

The outcome implies that had just one of his supporters chosen instead to have backed Diaz, the result would have been tied.

The closeness of the result – and indeed the fact that the verdict was pushed to a vote at all – suggests that Bańka, 34, will have to work hard to earn the full backing of WADA’s supreme decision-making body and, by extension, of the anti-doping community as a whole, if and when he does take over from Sir Craig towards the end of this year.

A video circulated last month in support of Bańka’s campaign featured the slogan, “We need unity today”, while emphasising the importance of cooperation between all WADA stakeholder groups.

Such a narrow victory underlines that this “unity” remains some way off and that the scars left by the Russian doping crisis and signs of mounting athlete disgruntlement have still not healed.

Sir Craig, a former chairman of the British Olympic Association, is due to step down in November after six years at the helm, and under the balanced formula by which WADA conducts its affairs, his successor must come from the Government sector.

While victory over Diaz makes Bańka red-hot favourite to become WADA’s fourth President, there remains some uncertainty over the intentions of Linda Helleland, the anti-doping body’s Norwegian vice-president.

A strong critic of the International Olympic Committee, Helleland has positioned herself as the choice of the athletes and the largely western National Anti-Doping Organisations (NADOs).

She initially pledged to carry on in spite of losing out to Bańka in the race for the crucial European nomination for the Presidency.

Bańka's manifesto includes a pledge to establish an anti-doping solidarity fund, which he claims will help build a strong network of NADOs and to finance capacity-building and partnership projects at national level.

The Polish official has suggested sponsors and commercial entities, as well as the sports movement and Governments, should finance the fund.

Another key part of his vision for WADA is to increase the number of accredited laboratories to address what he believes is a regional imbalance.

The Pole, a Summer Universiade gold medallist, labelled Tuesday’s decision “a very important day for me and for Poland”.