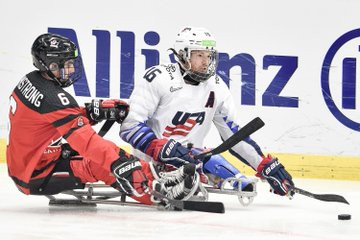 Roybal found the net just over five minutes into the additional period after a tense final had ended 2-2 at Ostravar Arena.

His goal sealed the American side's first World Championships crown since 2015 and drew them level with Canada on four titles.

It also ensured the US, who twice had to come from behind, avenged the defeat they suffered against their North American rivals in the 2017 final in South Korea.

South Korea claimed bronze for the second consecutive edition of the event thanks to a 4-1 win over hosts the Czech Republic in the third-place play-off.

There was a nervy start to the gold medal match and neither Canada nor the US broke the deadlock in the first period.

Canada went in front through Liam Hickey, the star of the show in their semi-final demolition of South Korea, before Josh Pauls equalised shortly after.

That was how it stayed until three minutes from time, when Declan Farmer restored parity for the US to send the match into overtime.

Both sides went in search of the winning goal and it came with 5:08 on the clock as Roybal beat Canadian goalkeeper Dominic Larocque to secure victory for the US.