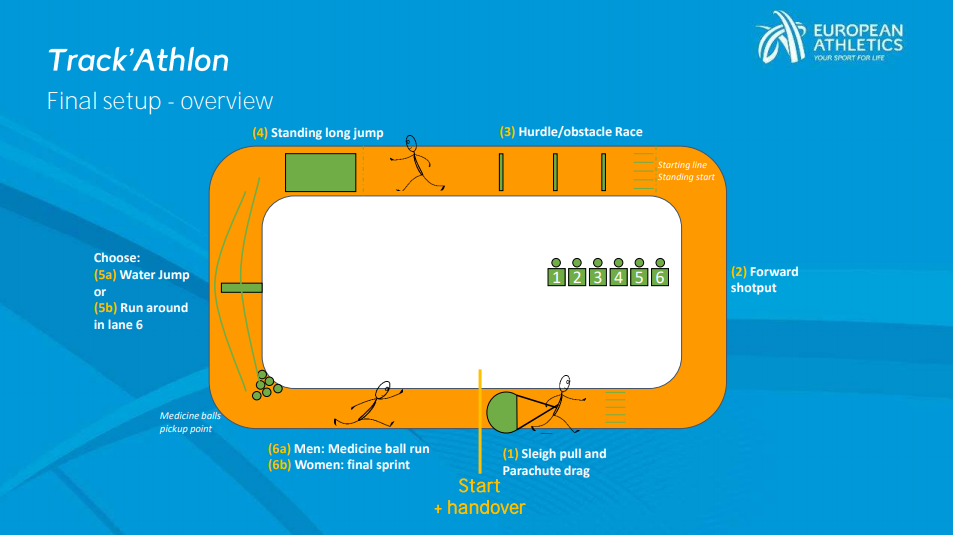 Track’athlon has not been replaced on the programme for the Dynamic New Athletics (DNA) event at the Minsk 2019 European Games, as organisers confirmed the 24 participating countries.

Details of DNA were released last year, with European Athletics billing the format as an "action-packed, mixed-gender team event built on tactics, competitiveness and grit".

Held over two hours, DNA sees teams of men and women compete over a series of events, which organisers say embraces "the basic athletics building-blocks of running, jumping and throwing".

The Track’athlon had been one of the new disciplines proposed, the event billed as an athletics assault course featuring a sled run, shot put toss, standing long jump, water jump and a medicine ball run.

A parachute run had been initially proposed for women instead of the sled run, but concerns over safety and gender equality led to the sled run being adopted for both men and women.

European Athletics' head of new business development Marcel Wakim admitted in November the Track’athlon had proved the most controversial part of the programme.

Track’athlon was later scrapped by organisers, with European Athletics stating a week after the European Olympic Committees General Assembly in November the discipline had "not made the cut".

An overall team title will be awarded instead.

Nine disciplines are now set feature in the DNA format, including men’s and women’s 100 metres races, as well as sprint hurdles events.

Women’s javelin and long jump, men’s high jump and a 4x400m mixed relay will also feature on the programme.

The event will conclude with "The Hunt" - a mixed medley relay event for two men and two women.

"The Hunt" is a distance-medley race in which the best-performing teams in the first nine events will get a proportionate head start.

Teams will take part in matches during the European Games, with points awarded depending on their performances during the first nine events to determine their position going into "The Hunt".

The winner of each event will receive 12 points.

The format envisages holding competitions between mixed participating teams, where all teams will be divided into groups, starting with the qualifying round.

Minsk 2019 revealed winners and medallists of individual disciplines and relay races will be determined based on the results of the first competition day on June 23, when qualifying rounds take place.

The medal ceremonies for the best individual athletes are due to take place on June 24.

Team quarter-finals are scheduled to held on June 25, with semi-finals taking place the following day.

The final is set to be held on June 28 and will determine the winners of the final set of medals.

European Athletics claim athletes in all DNA disciplines expect "The Hunt", which has no Olympic Games equivalent, will be eligible for qualification for Tokyo 2020.

Belarus will be among the 24 countries taking part, alongside Bulgaria, Cyprus, Czech Republic, Denmark, Spain, Estonia, France and Germany.

Authorised neutral athletes from Russia are also expected to form a team.

Some 504 athletes will take part.