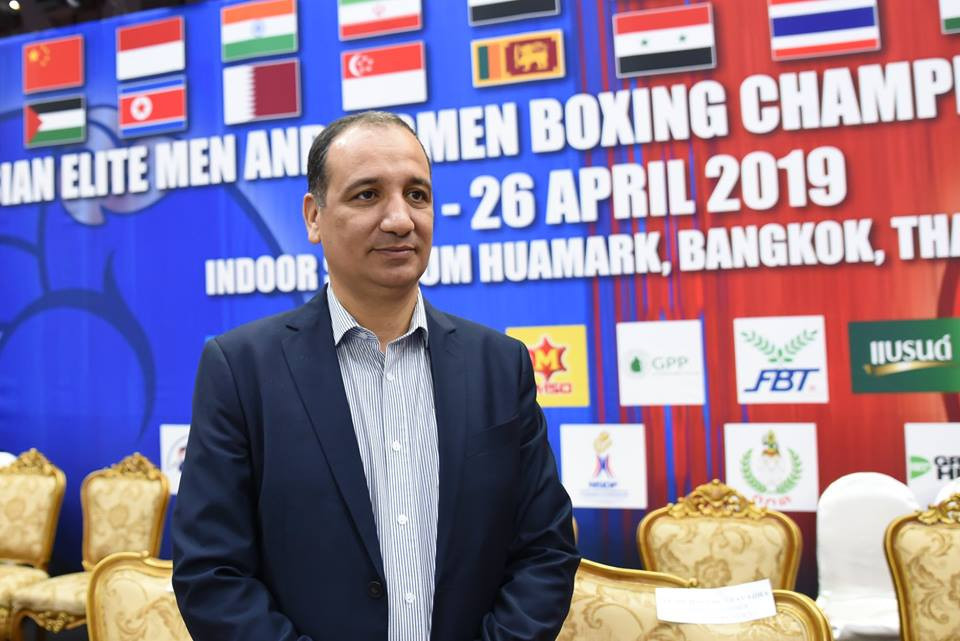 A split between the International Boxing Association (AIBA) and the European Boxing Confederation (EUBC) has deepened after Interim President Mohamed Moustahsane criticised the continental body's attempt to resolve the crisis in the sport.

Moustahsane said AIBA had been "surprised" by the approach taken by the European organisation after the EUBC Executive Committee created a working group to pressure the International Olympic Committee (IOC) into keeping boxing on the Tokyo 2020 programme.

The Moroccan, elected Interim President to replace Gafur Rakhimov, denied the EUBC permission to directly contact the IOC and said the working group was "not the answer".

The EUBC had tried to take the issue into its own hands amid the IOC inquiry into AIBA, which could result in the worldwide body being stripped of the right to organise the Olympic boxing tournament at Tokyo 2020.

The organisation, led by AIBA vice-president Franco Falcinelli, claimed it did not want to "remain idle" while the future of boxing within the Olympic Movement was "at risk".

The move made by the Executive Committee suggests the EUBC is concerned by the progress made by AIBA towards maintaining its status as the IOC-recognised body for boxing.

But their efforts have been quickly rebuffed by AIBA, representing an escalation in the dispute between the embattled organisation and the EUBC over the sport's Olympic future.

The Asian Boxing Confederation has declared its support for AIBA, highlighting how the EUBC's position is at odds with other continental bodies.

"While I understand the concerns raised regarding the position of AIBA and boxing in the next Olympic Games, I have to say that I am surprised by the way in which you and the EUBC are approaching this situation," Moustahsane wrote in a letter to Falcinelli, seen by insidethegames.

"With all of your experience as EUBC President and being a former AIBA Interim President, you know very well that AIBA is working hard to protect and secure its Olympic status and safeguard the boxers so that we can all continue upon our Olympic quest."

The EUBC Executive Committee said it would ask AIBA to allow it to "initiate a relationship" with the IOC and the Association of Summer Olympic International Federations (ASOIF) as part of its desperate attempt to ensure AIBA remains the Olympic governing body for the sport.

In response, Moustahsane said it was "completely inappropriate for the EUBC or any individual to address ASOIF or the IOC directly".

The African Boxing Confederation head added that a European working group was not the correct solution as he called for unity within the fractured boxing community as it awaits a decision from the IOC.

Boxing will almost certainly feature at Tokyo 2020 in some form but who organises the qualification process and the tournament itself remains unclear.

The IOC Inquiry Committee is due to submit its final report to the Executive Board at its next meeting in Lausanne on May 22.

"With less than one month to go before the IOC Executive Board's report, if the EUBC or any national federations would like to help our cause and that of our boxers, I would suggest that all efforts go into contacting the National Olympic Committees, IOC members and media in each of your countries," Moustahsane wrote.

"Explain the situation and share the good news and positive progress that AIBA has made in such a short time in terms of governance, finance refereeing/judging and anti-doping – be ambassadors for our sport!

"Our boxers need us to unite now, they are our top priority.

"I trust that you agree that we must continue working hand in hand for the future of our sport and show our unity and our strong devotion to boxing."

The investigation was mainly triggered by the election of Rakhimov as President in November owing to him remaining on a United States Treasury Department sanctions list as "one of Uzbekistan's leading criminals".

But the IOC insisted it had other grave concerns with AIBA other than Rakhimov – who denies wrongdoing – such as its financial situation, ethics and refereeing and judging following the scandal at Rio 2016.

AIBA is hopeful recent developments, including the 67-year-old Uzbek stepping aside and a proposal from influential Russian official Umar Kremlev to personally write off AIBA's significant debt, will count in its favour when the IOC makes its decision.