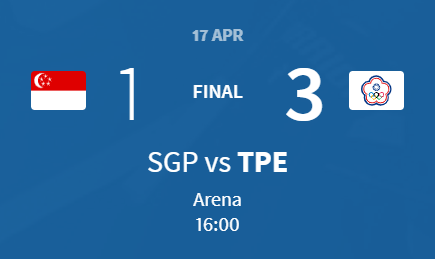 Chinese Taipei won for the second time in as many days to end Singapore’s unbeaten run at the International Ice Hockey Federation (IIHF) Women’s Challenge Cup of Asia in Abu Dhabi today.

A first-period brace from Tan Su-Ting put the Taiwanese firmly in command at the Arena in the United Arab Emirates' capital before Wang Hsin-Yu made it 3-0 in the second.

Elizabeth Chia pulled one back for Singapore in the third period but it proved in vain.

Chinese Taipei lead the round-robin standings by virtue of a superior goal difference over Singapore, plus-12 to plus-four.

Both teams have six points after winning two of their three outings.

In today’s later game, New Zealand beat Malaysia 4-0 to move up to third.

Amber Metcalfe bagged a double for the Kiwis, while Abbey Heale and Kate Vernal chipped in with one goal apiece.

Defeat for Malaysia extends their winless run to three matches.

They are rooted to the bottom of the standings with Thailand above them in fourth spot.

Action in Abu Dhabi is due to continue tomorrow with Thailand facing Singapore.

The first women's version of the tournament took place in Shanghai in 2010.