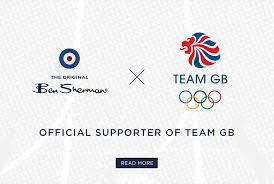 Ben Sherman previously produced official formalwear for the British team at the 2004 Olympic Games in Athens.

They replace the Stella McCartney fashion house, who had worked on designs for London 2012 and Rio 2016.

The brand will create an "exclusive look" to be worn by all British athletes during the Opening Ceremony at Tokyo 2020 next July.

They will create a commemorative fashion collection available for retail, they promised.

"Ben Sherman is a heritage brand synonymous with British fashion and having worked together for Athens 2004, they know what Team GB means in this country," Tim Ellerton, the BOA commercial director, said.

"The Opening Ceremony of a Games is a unique moment when the eyes of the world are on the team before the excitement of Tokyo 2020 commences.

“Ben Sherman is known for its creativity and class and we are already excited about the designs they have in mind that will introduce the brilliant Team GB athletes to the world at the Games in the best possible way."

The BOA state Ben Sherman have been known for over 55 years, with the brand viewed as revered and worn by "style leaders of today".

Ben Sherman creative director Mark Williams claimed the company were proud to secure the agreement with the BOA.

"It’s absolutely amazing for the brand to represent Team GB at the Olympics," he said.

"For over five decades the Ben Sherman brand has been steeped in British youth and style culture, I am honoured to be tasked with creating this collection.

"The design elements will hold true to the spirit of the Olympics.

"We want the athletes to feel an immense sense of achievement and unity while representing the nation during the Opening Ceremony.

"We can’t wait to see them walk out as a talented group of diverse individuals, from all walks of life, unified in the same look and believing in the same principles aimed at a common goal."