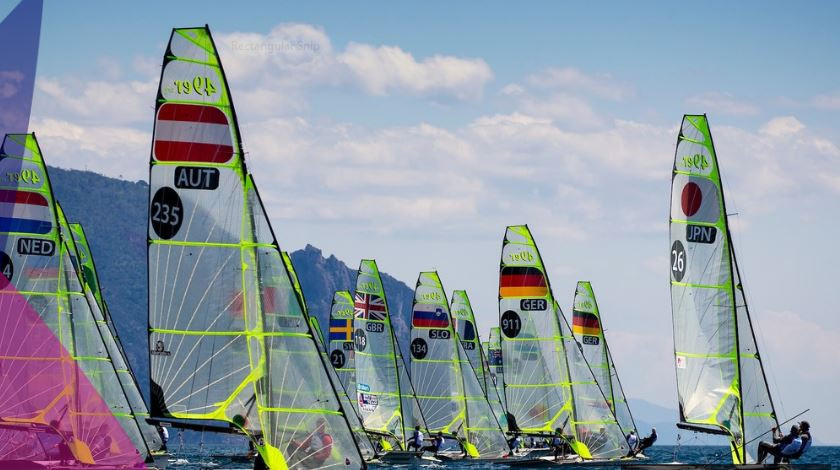 Germany's Tim Fischer and Fabian Graf got off to a perfect start in the men's skiff - 49er as the first ever Hempel World Cup Series event in Italy began in Genoa with racing in the 49er, 49erFX and Nacra 17, due to conclude on Saturday (April 20).

The Italian city is hosting over 700 sailors, including competitors in eight of the 10 Olympic events.

Racing in the 470s, Laser, Laser Radial and Finn is scheduled to start tomorrow and finish on Sunday (April 21).

In a split 65-boat 49er pack, the Germans won both of the day's races in the blue fleet and were the standout performers on day one.

In the yellow fleet, New Zealand's Isaac McHardie and William McKenzie picked up a race win and a second to occupy the second podium spot in the early stages of the event.

Fellow Kiwis Peter Burling and Blair Tuke, the Rio 2016 gold medallists and Amerca’s Cup winners sailing in their first World Cup regatta since April 2016, finished 14th and 15th in the blue fleet and are 31st overall.

Sweden's Julia Gross and Hanna Klinga lead after two races in the 49erFX.

Brazil’s Martine Grael and Kahena Kunze are on a run of five straight victories and are currently undefeated in this season's World Cup Series.

They clinched the  gold medal back in September on the Tokyo 2020 Olympic waters and swiftly followed up with another in January’s Miami sunshine.

It was not all smooth sailing in the United States for the Brazilians as they were initially off the pace against New Zealand’s Alex Maloney and Molly Meech, but they overcame a huge deficit in the medal race to upset the odds.

The Brazilian and New Zealand rivalry goes back to Rio 2016, where Grael and Kunze clinched gold by just two seconds in the medal race.

On the road to Tokyo 2020, there is very little separating the two teams, and Genoa will no doubt throw out another compelling narrative in the latest showdown.

In the Nacra 17, Ben Saxton and Nicola Boniface of Britain and Italy's Lorenzo Bressani and Cecilia Zorzi share top spot with a win apiece.

But the home expectation is still great for 2018 world champions Ruggero Tita and Caterina Banti.

Pavlos Kontides  of Cyprus has dominated the laser in recent years, winning back-to-back World Championship titles in 2017 and 2018, but he finished a disappointing 25th at Trofeo Princesa Sofia.

The Cypriot will be hoping to put things right in Genoa, but he will be up against Rio 2016 silver medallist and good friend Tonči Stipanović of Croatia.

Wannes Van Laer of Belgium, Karl Martin Rammo of Estonia, Finn Lynch of Ireland, Hermann Tomasgaard of Norway  and Jesper Stalheim of Sweden will also be targeting the podium.

In the laser radial, Anne-Marie Rindom of Denmark  will be the one to beat following her gold medal performance at Trofeo Princesa Sofia.

Rio 2016 silver medallists Mat Belcher and Will Ryan of Australia will spearhead the 43-boat men’s 470 fleet.

The gold medallists from Enoshima, Keiju Okada and Jumpei Hokazono of Japan and Jordi Xammer Hernandez and Nicolás Rodriguez Garcia-Paz of Spain will also figure strongly.

In the women’s 470, 37 teams will fight for gold and Italy’s own Benedetta di Salle and Alessandra Dubbini will be keen to impress on their home waters.

The Italians showed their worth by securing bronze in Enoshima at the start of the 2019 series.

A total of 21 competitors will face off in a relatively inexperienced Finn fleet -  Jorge Zarif of Brazil is the only competitor in the world’s top 15.