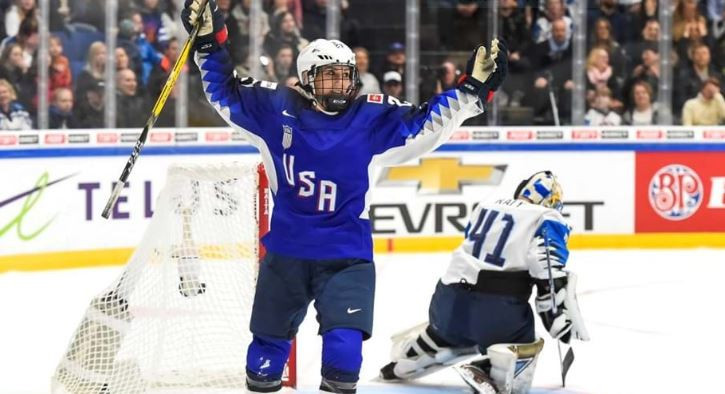 History slipped in and out of Finland’s grasp on the home ice of Espoo tonight as what appeared to be an overtime goal that earned them victory over the Olympic and defending world champions United States was disallowed – and they then lost out 2-1 in a shoot-out that secured a fifth consecutive title for the holders.

There was huge drama as the home side – and the vast majority of the 6,053 spectators crammed into Espoo Metro Areena – believed they had done the impossible and won the title in their first global final with a golden goal from Petra Nieminen with 8min 27sec of overtime remaining which sparked crazy celebrations and a mass huddle at the side of the ice.

Tournament MVP and all-star defender Jenni Hiirikoski had made an end-to-end rush and her initial shot was stopped by US goalie Alex Rigsby.

As Rigsby slid out of the net and Hiirikoski made contact, with the United States’ Kacey Bellamy right on top of her, Nieminen banged the rebound into the gaping cage.

But, to howls of derision from the packed home crowd, officials ruled the effort out for goalie interference after a lengthy video review.

,And with the sides remaining at 1-1 after overtime, the gold medal match went to an excruciating shootout.

Amanda Kessel and Annie Pankowski converted the first two efforts to give the United States a 2-0 lead after Michelle Karvinen and Ronja Savolainen had missed.

But when Finland’s Minnamari Tuominen  converted their third effort and Alex Carpenter’s effort was saved by the outstanding Finnish keeper Noora Raty, the pressure was on.

After Nieminen failed to convert with the fourth effort,  Hilary Knight, scorer of five goals in the 8-0 semi-final win over Russia, had the chance to finish it for the States – but once again Raty saved to keep the home side’s unlikely ambition alive.

Finland’s final effort was the responsibility of their scorer in normal time, Tapani, but this time it was the US keeper Rigsby who rose to the occasion, producing the save that ensured a 2-1 win for her team without them requiring to make their fifth attempt.

Pankowski had given the United States the lead in the second period, striking at 35min 46sec.

But the home side struck back almost immediately, Tapiani equalising at 38.29.

The #USWNT claims a fifth straight #WomensWorlds gold medal with a shootout win over Finland!

Finland's first world silver medal is an incredible achievement, especially considering no European nation has ever played in the final before.

But it may be a while before it feels that way.

In the earlier third-place match, Canada – playing for bronze for the first time in a global tournament following the previous day’s 4-2 defeat by the hosts – thrashed Russia 7-0.