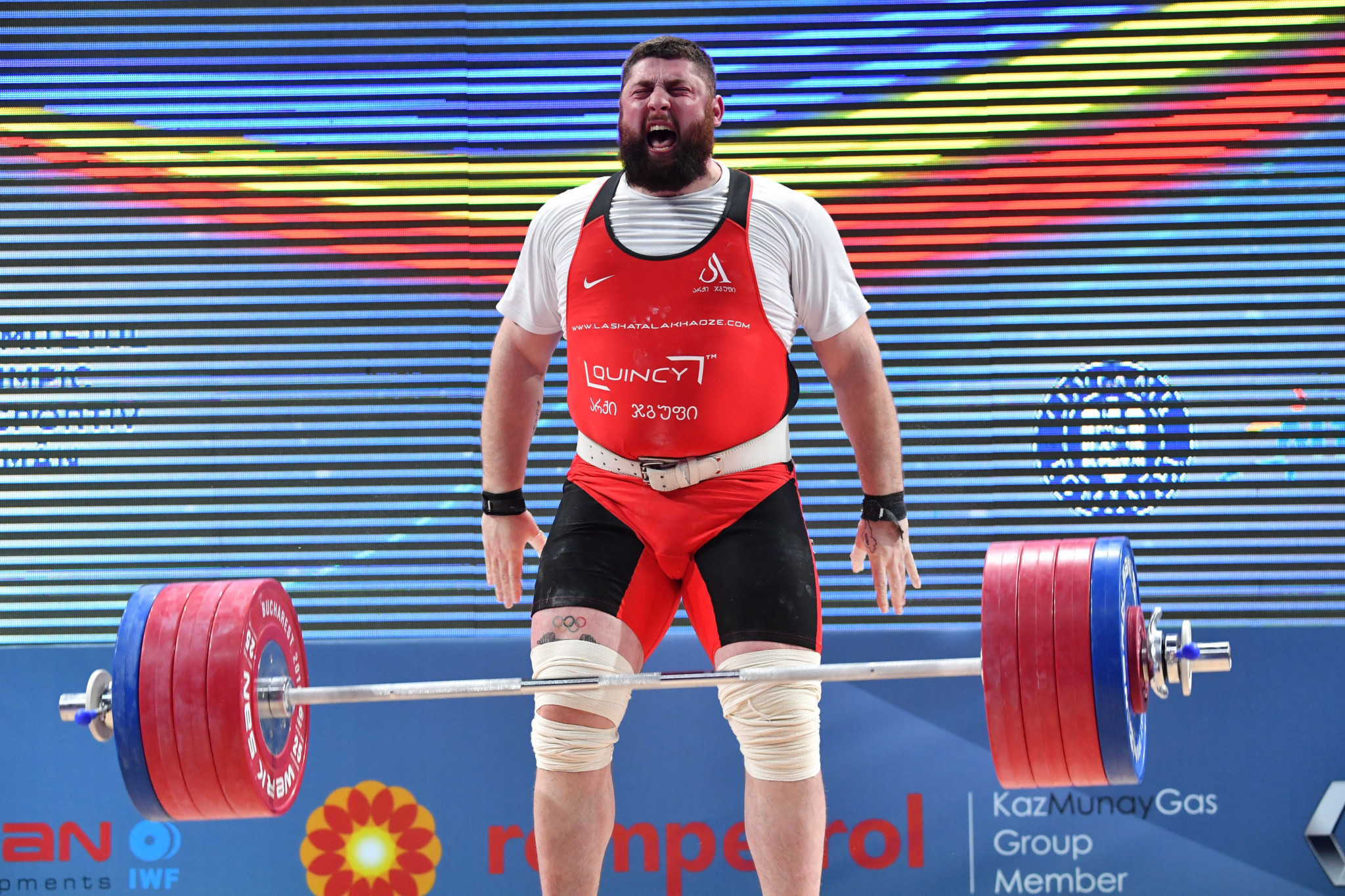 A noisy home crowd in Batumi, Georgia were on their feet on the final day of the European Weightlifting Championships when Lasha Talakhadze smashed three of his own world records in the final event, the men’s super-heavyweights.

Amazingly, Talakhadze, one of Georgia’s great sporting heroes, needed only four lifts to set records on snatch, clean and jerk and total – he gave up the other two.

There was also a world record for Tatiana Kashirina, whose victory in the women’s super-heavyweights ensured Russia finished top of the medals table ahead of Belarus.

The crowd roared Talakhadze, Olympic and world super-heavyweight champion, to a snatch of 218kg and a clean and jerk of 260kg.

They respectively improved his records by 1kg and 3kg, making his 478kg total an improvement of 4kg on the mark he set in Ashgabat, Turkmenistan at last year’s International Weightlifting Federation (IWF) World Championships.

The legendary Soviet lifter Leonid Taranenko lifted 266kg, the highest ever single lift, at a sponsored super-heavyweight contest in Australia in 1988, when body weight classes were different.

It seems only a matter of time before Talakhadze overtakes him.

Georgia also took the silver through a very respectable 447kg total by Irakli Turmanidze, who was in turn 7kg clear of Ruben Aleksanyan, of Armenia.

Talakhadze, 25, made a 10kg jump from first snatch to second, and went up 15kg for his second clean and jerk.

Kashirina, who has suffered her first defeat since 2012 in the IWF World Cup in China in February, returned to form in style by bettering her own world record on total, with 331kg.

If she had made her final snatch attempt of 150kg she would have had two world records, and would have lifted more in the snatch than anybody else made in clean and jerk.

Kashirina won by the biggest margin of the week, 63kg, ahead of Ukraine’s Anastasiia Lysenko and Britain’s Emily Campbell, whose personal best of 260kg is the biggest weight lifted by a British female.

There were plenty of Armenians in Batumi too, and they also had plenty to cheer when Simon Martirosyan won the 109kg by 16kg to enhance his status as one of the strongest favourites for Tokyo 2020.

Martirosyan, 22, holds the clean and jerk and total world records in this class, and he went for the snatch too with an attempt at 197kg, but this time he failed.

He did not take his final lift after making a total of 427kg, well ahead of Andrei Aramnau of Belarus, and Russia’s Rodion Bochkov.

There were only four failures from 27 lifts in a top-quality snatch contest, but three times as many in the clean and jerk when the referees came down hard on any sign of a press-out.

The crowd jeered but the officials were right and with others failing the Latvian Arturs Plesnieks and the Pole Arkadiusz Michalski moved into clean and jerk medal positions, though they were out of the medals on total.

Ukraine had to wait until the last day to make an appearance on the medals table, through Lysenko and, earlier, the 102kg winner Dmytro Chumak.

He was second to Iran’s Ali Hashemi in the first Olympic qualifying event, the 2018 IWF World Championships, and a clear winner in Batumi on 391kg.

The silver went to Samvel Gasparyan of Armenia (377) and bronze to Vadzim Straltsou of Belarus (376).

Russia, for whom Bochkov made a personal best of 410kg for his 109kg bronze, sent only four of their 10 World Championships men’s team to Batumi.

The Russians, thanks to a strong finish in the final two days, topped the medals table with three golds, five silvers and three bronzes – and that world record.