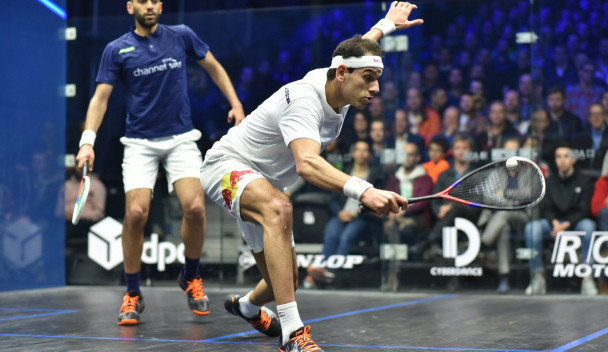 Mohamed ElSherbagy duly defeated his younger brother Marwan in the last quarter-final of the night at the DPD Open squash tournament in Eindhoven to earn a semi-final meeting tomorrow with fellow countryman Karim Abdel Gawad.

The elder ElShorbagy, who lost his world title this year to another Egyptian, Ali Farag, is seeded second in this Professional Squash Association (PSA) World Tour Gold tournament at DPD headquarters in Belgium.

This was the first meeting between the pair since last year’s El Gouna International, when Marwan took the victory en route to winning the event in his home country.

"I had to be sharp," said Mohamed.

"When he plays me, or Ali [Farag], or Tarek [Momen], or any of these top guys, he can turn his engine on at any time."

Gawad and Coll had met on just three previous occasions on the PSA World Tour, with the Kiwi claiming the last two victories.

On the other side of the men’s draw,  world champion Farag earned his semi-final place with an 11-5, 11-1, 6-11, 11-9 win over Colombia’s British Open champion Miguel Rodriguez, who was forced to take an injury break early in the fourth game after going over on his ankle.

Rodriguez nevertheless managed to resist multiple match balls held by his opponent until the Egyptian eventually closed out by an 11-5, 11-1, 6-11, 11-9 scoreline.

The German put on a masterclass performance to take out James, who had secured a big upset in the previous against world number eight Mohamed Abouelghar.

"Especially against someone like Dec, who is a really confident player, if he gets leads he can really destroy you."

World number one Raneem El Welily and United States number one Amanda Sobhy produced an epic five-game battle before the Egyptian player earned her semi-final place with a 7-11, 11-7, 11-7, 4-11, 11-8 victory in 53 minutes.

The two players had not faced each other since Sobhy returned from her Achilles tendon injury last year.

El Weliy is now scheduled to face compatriot and world number three Nour El Tayeb for a place in the final.