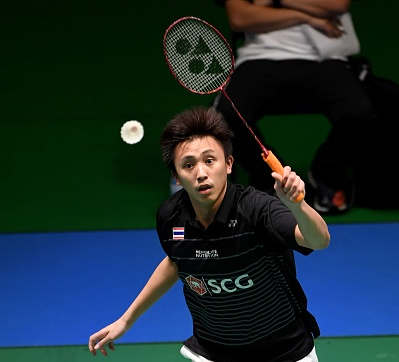 Saensomboonsuk, who made the main draw at the recent BWF India Open, repeated the feat at the Singapore Indoor Stadium today.

Saensomboonsuk was then forced to come from a game down again in his match with Shesar Hiren Rhustravito of Indonesia.

His reward will be a first round match against the men’s singles second seed Chou Tien-chen of Chinese Taipei.

Chou will be looking to bounce back from his first round loss at the Malaysia Open to China’s Lin Dan, who ultimately won the tournament in Kuala Lumpur.

World number one Kenta Momota headlines the men’s singles draw, with the Japanese star set to begin his title challenge when he faces India’s B. Sai Praneeth in the first round of the Super 500 event.

Denmark’s former world champion Viktor Axelsen and China’s Chen Long, the runner-up at the Malaysian Open, are the third and fourth seeds respectively.

Women’s world number one Tai Tzu-Ying heads into the tournament after an eventful week.

The Chinese Taipei player triumphed at the Malaysia Open, while she also announced her plan to retire from the sport after the Tokyo 2020 Olympic Games.

Tai will face the United States’ Zhang Beiwen in the first round of the women’s singles competition.

Second seed Nozomi Okuhara of Japan will take on Russia’s Evgeniya Kosetskaya in her opening match.