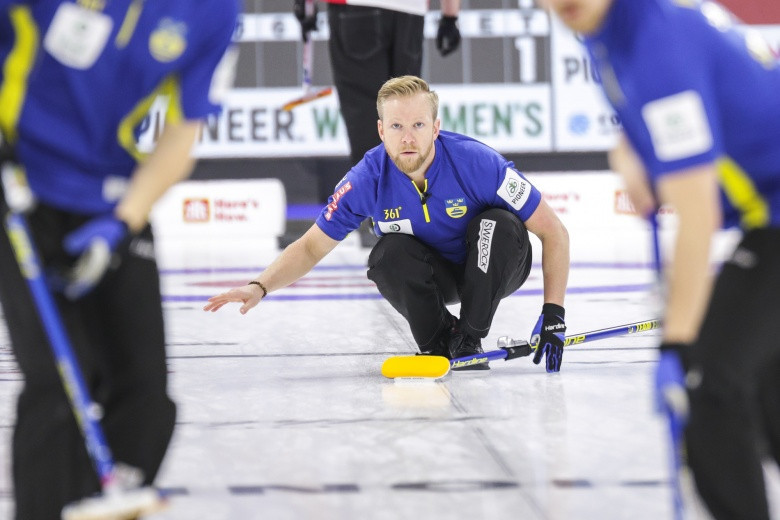 Hosts Canada moved clear at the top of the World Men's Curling Championship standings after Switzerland suffered their first defeat of the tournament in Lethbridge.

Canada are the only remaining unbeaten team following a 7-4 win over Germany in the afternoon session at the ENMAX Centre.

Switzerland had the chance to go above the Canadian rink when they took on defending champions Sweden.

But the Swedes were in fine form as they recorded a 9-4 victory to join Switzerland and Japan in a three-way tie for second place.

Sweden, Switzerland and Japan each have six wins and one defeat from their first seven matches, with Canada top on six victories and no losses.

The Swedish rink, skipped by Niklas Edin, had earlier lost 6-5 to Scotland in a tense encounter in the morning session.

"Especially after our loss this morning, we said we are going to have to step it up and get it going," said Edin.

"At the beginning of the game there were chances for both teams, but you’ve got to make all the shots against these guys.

"I think we got the best of it in this game and that’s a really important win, for sure."

Japan cemented their spot in the top two after beating both South Korea and Germany.

The Japanese side overcame South Korea 8-7 in the morning session and then defeated Germany 6-4.

"Our first goal is to get to the play-offs, and it’s close now.

"It’s all been fantastic here, a nice crowd and the ice is great.

"Also, the team is playing well."