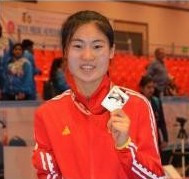 China’s Yujie Li has been voted the International Paralympic Committee’s Allianz Athlete of the Month for February after her impressive victory at the World Para Taekwondo Championships in Antalya in Turkey.

Li marked her debut at the event by claiming a surprise gold medal in the women’s up to 58 kilograms K44 division.

In what was her first international competition, she upset home favourite Gamze Gurdal and Mexico’s Jessica Garcia Quijano.

Li received 51 per cent of the public vote.

French Nordic skier Benjamin Daviet was second in the poll with 28 per cent.