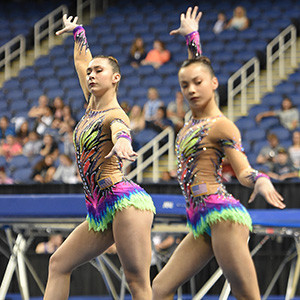 Teams from Russia qualified in first and second place for the final of the mixed pairs competition today at the International Gymnastics Federation Acrobatic World Cup in Las Vegas.

With medal action set to take place tomorrow, the Russian pair of Victoria Aksenova and Kirill Startsev finished top of the pile in qualifying at the Rio Hotel, Casino and Convention Center with a score of 58.970.

Another duo from Russia finished just behind them as Kirill Volnkin and Madina Zakariaeva scored 57.930.

A pair from Belarus were the best of the rest as Artur Beliakou and Volha Melnik scored 57.360.

In theory, eight teams should advance to tomorrow’s finals in each event but in both the men’s and women’s pair events, fewer than that number took part in qualifying.

Among a field of seven in the men’s event, Kazakhstan’s Daniel Dil and Vadim Shulyar finished top with 55.840, while out of just four teams in the women’s event, Portugal’s Rita Ferreira and Ana Teixeira scored 55.560 to finish first.

United States duo Emily Davis and Aubrey Rosilier finished second in women’s qualifying with a score of 55.040, while Australia’s Katelyn Dullard and Tori Singleton finished just behind them on 54.184.

Back in the men’s event, Belarus’s Artsion Yashchanka and Aliaksei Zayats scored 55.290 to finish second in qualifying, ahead of Germany’s Michail Kraft and Tim Sebastian who scored 55.180.