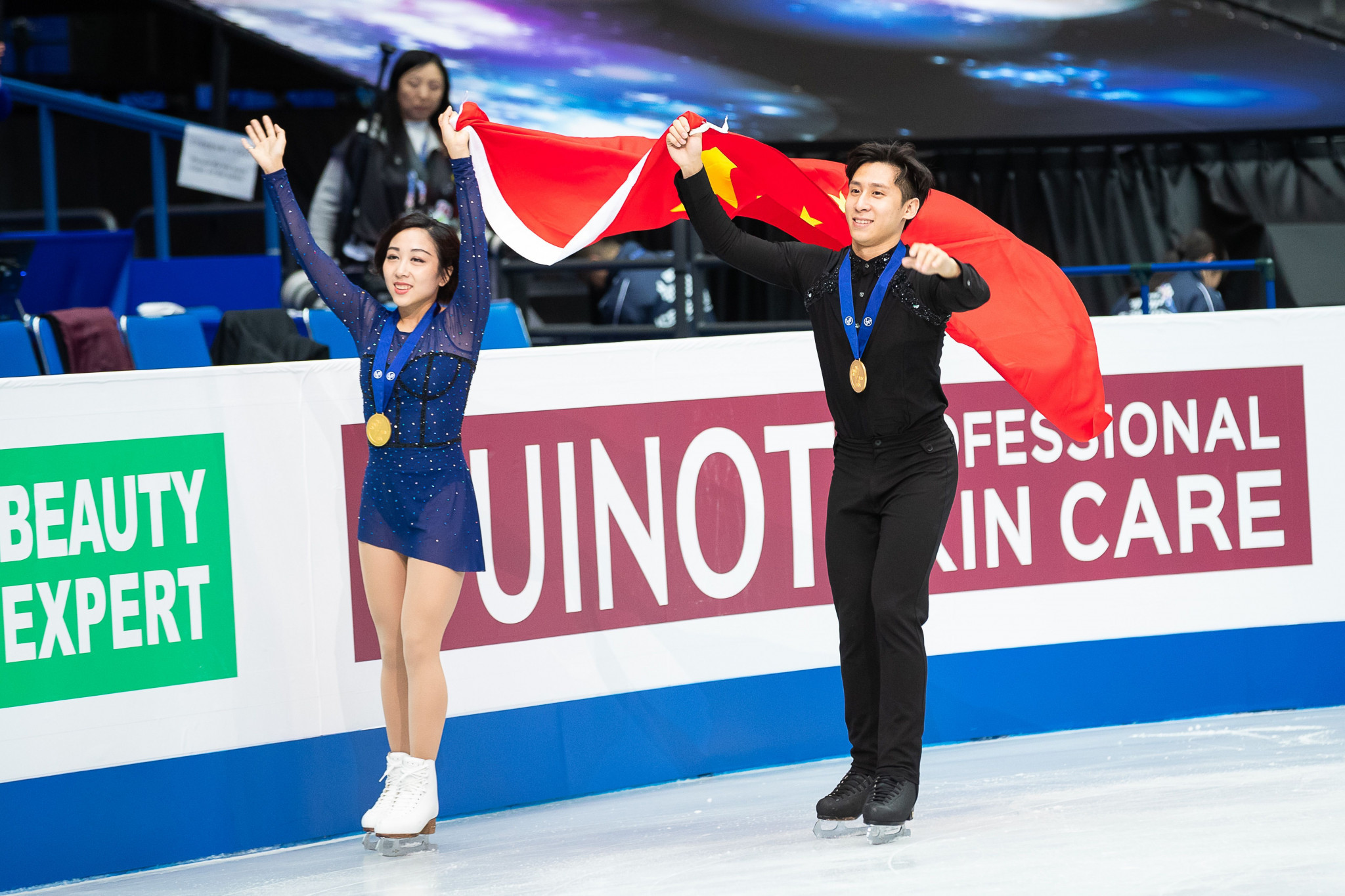 China's Wenjing Sui and Cong Han won pairs gold at the World Figure Skating Championships but the event was overshadowed by a claim that South Korean Lim Eun-soo was deliberately injured by American Mariah Bell.

Nathan Chen also dominated the men's short programme on a dramatic day at the Saitama Super Arena in Japan.

The Chinese pair, the Olympic silver medallists at Pyeongchang 2018, reclaimed the world title they won in Helsinki in 2017 as they rose from second place overnight.

The five-time Four Continents champions also demonstrated level four lifts as they were given a mark of 155.60.

This meant an overall score of 234.84 as they climbed above short programme leaders Evgenia Tarasova and Vladimir Morozov of Russia.

"We are very happy to have shown our best performance and to win this Championship," said Sui.

"We had a tough time, we could not prepare so well and did not have much time to practice.

"Our coaches and our team gave us a lot of support and we knew we can make it and get the title.

"Winning the second time was harder and it was a team effort."

The Russians, who are two-time European champions, ended on 228.47 with Morozov not at his best on the solo jump triple toe and the triple Salchow.

Natalia Zabiiako and Alexander Enbert earned bronze for Russia, climbing up from fourth to third and ending on 217.98.

China's Cheng Peng and Yang Jin dropped out of the medals and ended fourth on 215.84.

Elsewhere, the claim regarding Lim stemmed from an incident during practice before the ladies' short programme yesterday.

The 16-year-old reportedly received a cut to her calf after a collision with Bell, which the Korean's representatives All That Sports claim was deliberate.

Lim, skating with a cut taped up, went on to finish fifth in the short programme with Bell sixth.

An All That Sports official told Yonhap that Lim was skating close to the walls and Bell came from behind to make contact.

But no official complaint has yet been received by the Korean Skating Union and the International Skating Union (ISU) have said there is no evidence of foul play.

"The ISU has been made aware of a statement published on March 20 by All That Sports, and subsequently by the Korea Skating Union on March 21 about an incident which happened between Mariah Bell and Eun Soo Lim, during their practice on March 20 at the ISU World Figure Skating Championships," an ISU statement said.

"The incident was verbally reported to the ISU by the Korean team leader, however no formal complaint has been received.

"Based on the evidence at hand at this point in time, which includes a video, there is no evidence that Ms. Bell intended any harm to Ms. Lim.

"The ISU met with delegates from both USA and Korea and urged both parties to find an amicable solution.

"The ISU maintains that this remains the appropriate approach."

Chen, the defending men's champion, looks on course to defend that crown after his stunning short programme.

The American achieved a season's best of 107.40 points with second-placed compatriot Jason Brown adrift on 96.81.

A quadruple Lutz, a triple Axel and a quad-triple toeloop combination were part of Chen's routine, while he also pulled off level four spins and footwork.

"For the quad Lutz, I felt okay going up in the air, in the air I felt great and coming down, I just completely lost my foot, but somehow managed to pull it out, and I was really happy about that," said Chen.

"It is always a pleasure to skate in Japan with this amazing crowd, it's such a huge crowd so that energy, I think all of the skaters really feel, and I always have a great time competing with the best of the best here at Worlds so I'm really looking forward to another long programme."

The ice dance competition will begin tomorrow when the ladies' champion will be crowned.

The men's free skate is on Saturday (March 23).