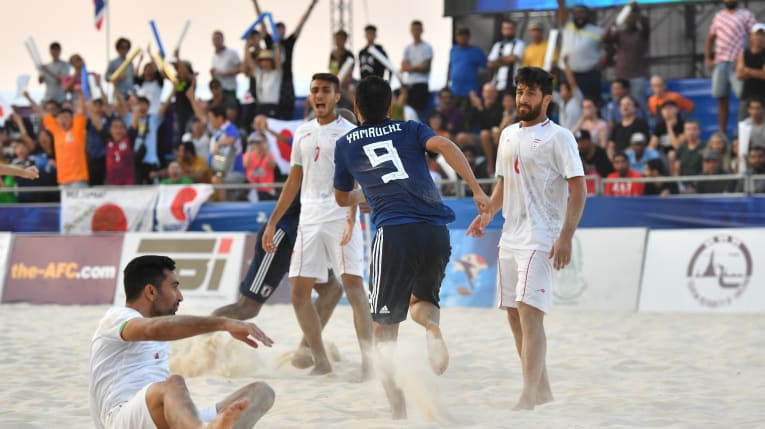 Defending champions Iran have been knocked out of the Asian Football Confederation Beach Soccer Championships at the quarter-final stage, after losing to Japan 3-2 in Thailand today.

The 2017 champions, who also won the tournament in 2013, entered today's match in Pattaya having lost to Oman on Tuesday (March 12) and finished runners-up in Group D.

Unable to turn their form around, the Iranians gave up a 2-0 lead in the Main Arena to crash out of the tournament.

It means Iran will now miss the FIFA Beach Soccer World Cup having qualified for seven of the last eight editions.

A 38th-minute free-kick from Takuya Akaguma sealed the win for Japan after the final whistle blew with the teams still locked at 2-2.

Palestine complete the #AFCBeachSoccer final four with a dramatic win over Lebanon! pic.twitter.com/E2K7zMDesW

Iran did initially take the lead in the ninth minute when Mahdil Shirmohammadi blasted in a free-kick after being fouled by Naoya Matsuo.

Just a minute later it was 2-0 when a wild bounce off the sand left goalkeeper Shingo Terukina helpless, but Japan brought it back to 2-1 after 21 minutes through Shusei Yamacuchi.

Two minutes into the final period the scores were levelled when Akaguma headed in at the back post and then he scored again in extra time to seal the win.

In another dramatic result Palestine beat Lebanon 4-3 to advance to the semi-finals.

A winner from Al Mahmoud Al Neirab sealed the victory with just 90 seconds remaining, after Lebanon had started the brighter.

Oman were the first side to book their place in the last four with a 5-3 win over Bahrain, while the United Arab Emirates, the 2017 runners up, thrashed Malaysia 8-1 to also make it through.