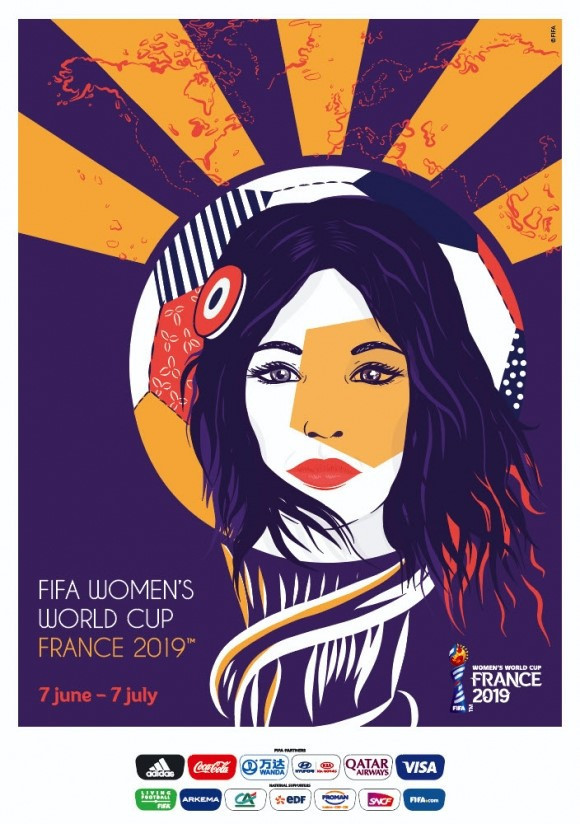 The official poster for the 2019 FIFA Women's World Cup in France has been unveiled at the Galerie Celal in Paris.

It is claimed the bespoke design of the poster reflects the "cultural creed" of the tournament, ensuring a level playing field for women’s football and empowerment through football for girls, women and society in general.

With a woman's face as the central feature, set against the background of a football, the work of art is said to encapsulate the "essence" of the eighth edition of the FIFA Women's World Cup, due to take place from June 7 to July 7.

The shards of bright yellow light in the poster reflect light and illumination - the key elements of the creative concept for the 2019 FIFA Women’s World Cup - captured by the tournament's official slogan "Dare to Shine".

The woman's hair is slightly windswept in a nod to female empowerment "sweeping" the globe, while her expression is determined and her gaze ambitious in what is meant to echo the skills of each of the 24 teams competing and their desire to become FIFA Women's World Cup champions.

The official poster was unveiled beside those of each of the nine host cities at the Galerie Celal.

It came just days after individual tickets for the 2019 FIFA Women's World Cup went on sale on the event's official website, accessible here.

Before this latest sales phase, 535,000 tickets had already been sold.

French supporters are leading ticket purchases, accounting for 53 per cent of sales.

A significant number of fans from the United States and The Netherlands are also snapping up tickets, with them making up 23 per cent and nine per cent of sales respectively.

FIFA recently announced that a global Women's Football Convention will be held in Paris just before the Women's World Cup begins, taking place on June 6 and 7.