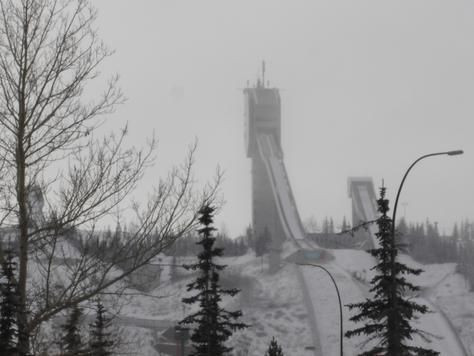 Facilities built for the 1988 Winter Olympics in Calgary could be closed permanently following the collapse of the city's bid to host the 2026 Games, the company that runs them has warned.

WinSport, the not-for-profit company that runs the venues at Canada Olympic Park, has revealed that it stood to receive almost CAD$100 million (£57 million/$75 million/€66 million) in Government funding if Calgary had been awarded the 2026 Winter Olympic and Paralympics.

But a local plebiscite last November saw citizens in Calgary vote against continuing the campaign.

The bid included funding to upgrade existing facilities at Canada Olympic Park, which was built for Calgary 1988.

The jumps were also the scene for the infamous achievements of Britain's Eddie "the Eagle" Edwards.

The bobsleigh track was, of course, the venue for the Olympic debut of Jamaica's bobsleigh team, an event later turned into a successful Walt Disney film, Cool Runnings.

The decision to drop the Calgary bid for 2026, leaving the only bidders as Milan-Cortina d'Ampezzo in Italy and Stockholm-Åre in Sweden, seems certain to have long-term consequences for Canada Olympic Park.

"It hurt us a lot; tremendously," Barry Heck, President and chief executive of WinSport, told The Globe and Mail.

"WinSport would have received a much-needed capital injection that would have solved all of our aging infrastructure issues - our day lodges, our snowmaking.

"The land will be repurposed for [another] sport."

The ski jumps were probably doomed even if Calgary had been awarded the 2026 Winter Olympic Games as those events were due to take place in Whistler, which had hosted them during Vancouver 2010.